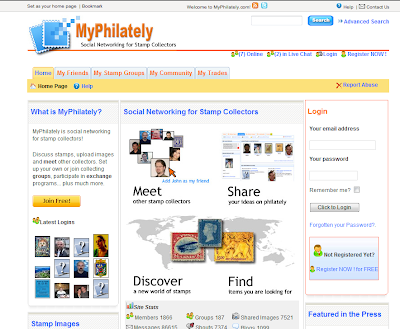 Today I am glad to present you an intresting philatelic social networking called MyPhilately.
You can find MyPhilately at ; http://www.myphilately.com

In order to give you some more information about it I have asked my friend Dan Brown to present us Myphilately and here is what he is telling us :


MyPhilately was formed from an idea nearly three years ago when social networking websites like MySpace and Facebook started to take off and I noticed a niche in social networking for stamp collectors. We then developed the software for around 8 months, released it to a few users and then fully released the website to the rest of the public late August 2007. The website was noticed straight away by the philatelic media outlets and was featured in Stamp Magazine UK, ASDA magazine USA and Canadian Stamp News.

Our goal - pure and simple is to improve communication for stamp collectors using the internet.

* You can build a network of philatelic friends online. Once you start building your network, it makes it very easy to gain and share information amongst your network.

* Create stamp groups which relate to specific themes or collecting areas. Each group is given a domain name for example http://www.myphilately.com/canada which allows users to easily spread the location to their friends outside of philately. The creator of the group can then maintain their group using an administration function.

* The MyGallery feature where users can upload images directly to MyPhilately, add information such as cat value, descriptions and share them with their friends and groups.

* Users can set up blogs, discussions, polls and even events which are occurring in philately, which then inform their friends or stamp groups.

* Share your skill set with your friends and have the ability to ask specific friends questions relating to their skills. For example if you have MyPhilately friends who are highly skilled in postmark recognition you can send them messages with postmarks for them to identify.

* MyPhilately Award system - if you see a blog/ comment/ discussion which you feel has helped you or improved your knowledge. You can give them a MyPhilately award. We feel it is the quality of their contributions and how they add to the community.