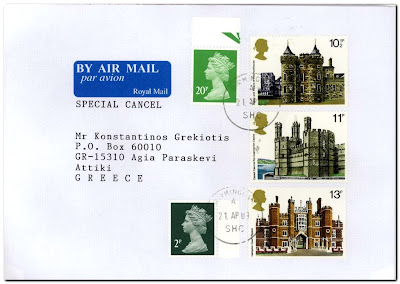 The stamps on the left of this cover are coming from a stamp set of 1978
dedicated to British Architecture.
(Architecture is one of my favorite topics) 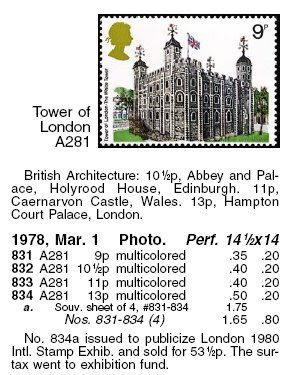 
Abbey and Palace of Holyroodhouse
The Palace of Holyroodhouse is the official (government-owned) residence of the Monarch of the United Kingdom in Scotland. Founded as a monastery by David I, King of Scots in 1128, it has served as the principal residence of the Kings and Queens of Scots since the 15th century. The Palace stands at the bottom of t

he Royal Mile in Edinburgh, the opposite end to Edinburgh Castle. Queen Elizabeth II spends one week in residence at Holyrood at the beginning of each summer, to host garden parties and official ceremonies. She then continues to Balmoral Castle (which she owns) for her her annual two-month summer hol 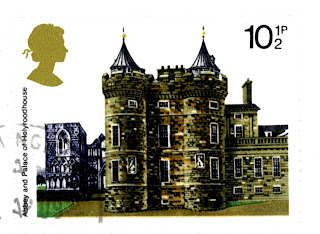 Holyrood is an anglicisation of the Scots Haly Ruid (Holy Cross).

Holyrood Abbey is a ruined Augustinian Abbey in Edinburgh, Scotland. The abbey (which is sited in the grounds of the Royal Palace of Holyroodhouse, which it predates) was built in 1128 at the order of King David I of Scotland.

Caernarvon is architecturally one of the most impressive of all of the castles in Wales. It's defensive capabilities were not as overt or as powerful as those of Edward I's other castles such as Harlech and Beaumaris (which indicate the pinnacle of castle building and defenses in Britain), but Caernarvon was instead intended as a seat of power - and as a symbol of English dominance over the subdued Welsh. 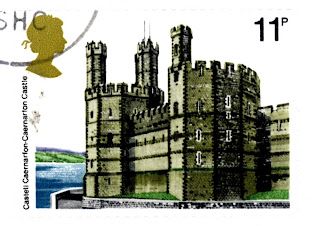 Caernarvon is located at the southern end of the Menai Strait between north Wales and Anglesey, 8 miles south west of Bangor. During Edward I's invasions of Wales, this was strategically an excellent place to build a castle; Anglesey was referred to as the garden of Wales, providing agriculturally rich land close to the poorer land on north Wales. The Menai Strait also allowed speedy access between the north Welsh coast and the western coast, and was therefore important for Edward to control for supplying outposts such as Harlech and Aberystwyth.

Hampton Court Palace is a royal palace in the London Borough of Richmond upon Thames in south west London; it has not been lived in by the British royal family since the 18th century. The palace is located 11.7 miles (18.8 km) south west of Charing Cross and upstream of Central London on the River Tham 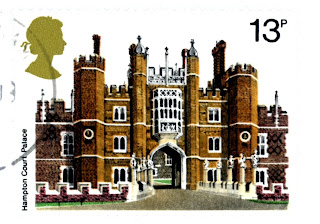 es. It was originally built for Cardinal Wolsey, a favourite of King Henry VIII, circa 1514; in 1529, as Wolsey fell from favour, the palace was passed to the King, who enlarged it.

The following century, William III's massive rebuilding and expansion project intended to rival Versailles was begun.[1] Work halted in 1694, leaving the palace in two distinct contrasting architectural styles, domestic Tudor and Baroque. While the palace's styles are an accident of fate, a unity exists due to the use of pink bricks and an, albeit vague, symmetrical balancing of successive low wings.[2]

Today, the palace is open to the public, and is a major tourist attraction. The palace's Home Park is the site of the annual Hampton Court Palace Festival and Hampton Court Palace Flower Show. Along with St. James's Palace, it is one of only two surviving palaces out of the many owned by Henry VIII.

The "missing" stamp is dedicated to the Tower of London

Her Majesty's Royal Palace and Fortress, more commonly known as the Tower of London (and historically as The Tower), is a historic monument in central London, England, on the north bank of the River Thames. It is located within the London Borough of Tower Hamlets and is separated from the eastern edge of the City of London by the open space known as Tower Hill.

The Tower of London is often identified with the White Tower, the original stark square fortress built by William the Conqueror in 1078. However, the tower as a whole is a complex of several buildings set within two concentric rings of defensive walls and a moat.

The tower's primary function was a fortress, a royal palace, and a prison (particularly for high status and royal prisoners, such as the Princes in the Tower and the future Queen Elizabeth I). This last use has led to the phrase "sent to the Tower" (meaning "imprisoned"). It has also served as a place of execution and torture, an armoury, a treasury, a zoo, the Royal Mint, a public records office, an observatory, and since 1303, the home of the Crown Jewels of the United Kingdom.

Thank you Barbara for the very nice cover
Posted by kgrek at 11:54 PM