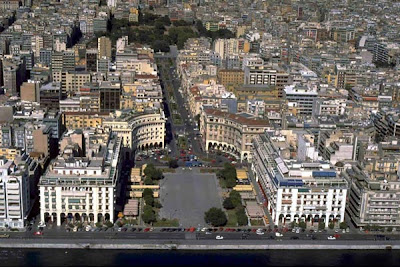 ΔΗΜΗΤΡΙΑ [Dimitria] takes place in Macedonia, in the city of Thessaloniki.

Dimitria festival is the main social event in the city's calendar and is held throughout the town of Thessaloniki. Having been all but forgotten, it enjoyed a remarkable revival in the 1960s. The festival prides itself in its mix of the traditional with the avant-garde and the range of events is impressive, featuring theatre, opera, dance, music, art and literary seminars. The traditional Thessaloniki feast day commemorating St. Demetrios traces its origin back to the days of the city's Golden Age, when the Byzantines ruled a vast empire from Constantinople (14th and 15th centuries). Starting from 1995 the Festival is listed among the members of the EFA. 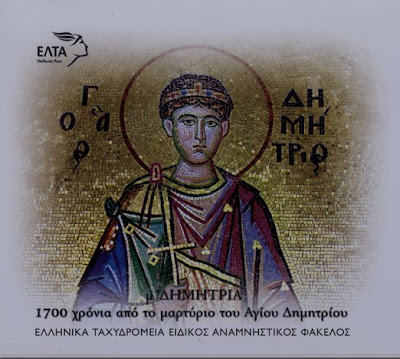 The 2005 Dimitria festival was dedicated to the 1700 years from the death of Saint Dimitrius (Agios Dimitrios). For honoring the death of Agios Dimitrios, The Hellenic Post Office had publish the following four (4) envelopes on 1st September 2005 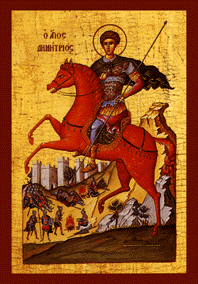 The Great Martyr Dimitrios (Greek Orthodox Christians celebrate His Memory on October 26), the Myrrh-flowing and Wonderworking Saint, was a Christian and the son of the military commander of Thessalonica in the early fourth century. Saint Dimitrios was the only son and was, because of this, most carefully cherished and educated. When his father died, Dimitrios was appointed by Emperor Maximian to take his place. Maximian was an opponent of Christ and charged Dimitrios to persecute and to kill the Christians in that city.

Instead, Dimitrios disobeyed Maximian and openly confessed and preached Christianity. Hearing of this, the Emperor was furious and on his way back from battles against the Sarmathians he went to Thessalonica to look into the matter. He summoned Dimitrios and questioned him about his faith. Dimitrios confessed his belief as well as his disgust for idolatry thus openly criticising the Emperor Maximian. The enraged Emperor Maximian cast Dimitrios into prison, and Dimitrios, knowing his fate, had his servant Lupus give his wealth to the poor being glad that suffering for Christ was to be his lot.

An angel of God appeared to Dimitrios saying, "Peace be with thee, thou sufferer for Christ; be brave and strong!" After several days, the Emperor sent soldiers to the prison to kill Dimitrios. The soldiers came into the cell finding the Saint Dimitrios at prayer, and killed him with their spears. Christians then secretly took his body and buried it, and Saint Dimitrios relics began producing a healing fragrant myrrh. A small church was soon built over Sain Dimitrios relics, and when an Illyrian nobleman, by the name of Leontius, ran prayerfully up to the relics of St. Dimitrios and was completely cured of an incurable disease, he built a much larger church replacing the small one.

Once, when barbarians invaded and plundered the city, two maidens were abducted. When the leader of the barbarians learned that the maidens could embroider, he threatened them to produce the likeness of Saint Dimitrios. They finished on the eve of the Saint Dimitrios feast and they wept asking for his forgiveness.
Suddenly, Saint Dimitrios appeared and transported them like an angel of God to the safety of his church in Thessalonica and left them among the people during a vigil.

Saint Dimitrios appeared on other occasions. When Emperor Justinian attempted to move the Saint Dimitrios relics to Constantinople, flames shot out of the tomb and a voice commanded them to, "Leave them there, and don't touch!" and thus the relics of Saint Dimitrios have remained in Thessalonica. Another time was when a young man responsible for the candles of the church was stealing them and reselling them from his home. Saint Dimitrios appeared to him and told him that he was harming himself and the church. The embarrassed man obeyed for a little while but soon returned to his old ways. One day, when he was about to steal some large candles that had just been lit near the tomb of Saint Dimitrios, a booming voice said, "Are you doing this again!" He fell over unconscious, and when he awoke, he related the whole story.

As the defender of Thessalonica, Saint Dimitrios has many times appeared and saved the city in times of trouble. The Russians also regarded Saint Dimitrios as the protector of Siberia.

On the left stamp is the head of Alexander the Great and on the right stamp is the picture of The basilica of Agios Dimitrios, Thessaloniki. For more info read below 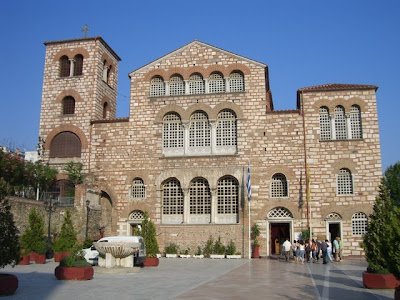 The basilica of Ayios Demetrios, Thessalonike

The basilica of Ayios Demetrios possesses a strong emotional appeal to the people of Thessalonike, while at the same time it constitutes a museum of Byzantine art on account of the successive phases of its building (5th and 7th centuries, and reconstruction in the 20th century). It was erected over the site of the Roman baths where the saint was martyred and where the earliest place of his worship once stood (4th century).

Its form, a five-aisled basilica with an additional transverse aisle in front of the sanctuary, resembles a cross in plan, denoting the site as a place of martyrdom. The sculptured architectural members and marble panelling of the walls vest the monument with the magnificence that befits the martyr Demetrios.

The decoration is complemented with 7th century wall-paintings and mosaics dating from the 5th to the 7th centuries and to the 9th century; they lack iconographic coherence, the main subject being the saint portrayed with the donors of the church or with a variety of other figures.

The mosaics are unique and of particular note in connection with the art of the Early Christian period, for in this instance the principles of Hellenistic art have not been entirely abandoned, although painting is becoming gradually more flat and more abstract.