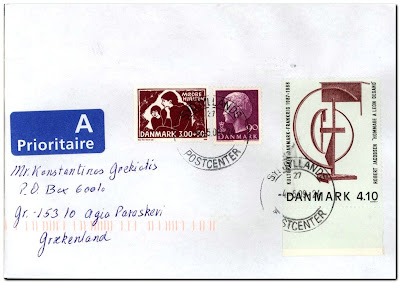 I have received through Cover Collectors Circuits this very intresting cover from Denmark.
As I was trying to write something about the stamps I discover that these stamps have been circulate on Sep. 22, 1988. 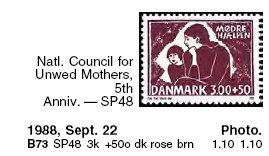 The first stamp belongs to the category of semi -postal stamps and is dedicated to the 5th Anniversary of unwed mothers.

A semi-postal stamp or semipostal stamp is a postage stamp issued to raise money for some purpose (such as a charitable cause) and thus sold over and above the cost of postage. Typically the stamp shows two denominations separated by a plus sign, but in many cases the only denomination shown is for the postage rate, and the postal customer simply pays the higher price when purchasing the stamps.

The first semi-postal was actually a postal card; to commemorate the Uniform Penny Post in 1890, the United Kingdom issued a card with a face value of one penny, but sold it for sixpence, with the difference given to a fund for postal workers. The first semi-postal stamps were issued by the Australian colonies of New South Wales and Victoria, who both marked the Diamond Jubilee of Queen Victoria in 1897 with stamps denominated in pennies, but sold for shillings, a 12x increase over the face value.

Semi-postals became widespread in European countries at the beginning of the 20th century. In many cases they have become standard annual issues, such as the pro juventute series of Switzerland started in 1913. Many 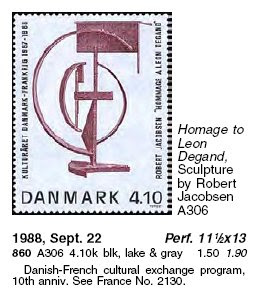 countries issued semi-postal stamps to raise money for the Red Cross in World War I. The surcharges are typically a fraction of the face value; at one points the Fédération Internationale de Philatélie was officially boycotting stamps with surcharges greater than 50 percent of face value, saying that such issues were exploitive of stamp collectors.

By contrast, the United States is a relative newcomer to semi-postals, with its first semi-postal being the breast cancer research stamp issued in July 1998.

The third stamp is dedicated to Leon Degand for the 10 th anniversary of the Danish-French cultural program. On the same day the French Post Office have issued a stamp with the same presentation. 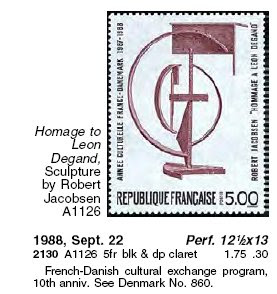 Léon Degand was born in 1907 in Ghent and died in 1958 in Paris. As soon as the end of 1944, he worked as an art critic for the weekly Les Lettres Françaises but he stopped contributing, when the French Communist Party fully took over the paper. His last article was published in the issue of the 1st August 1947. After participating in the setting up of the Museum of Modem Art of Sao Paulo for more than a year, he came back to France, in the late summer of 1949 and becames a member of the steering committee of the magazine Art d'aujourd'hui, to which he contributed regularly until his death. He continued writing in André Bloc's magazine - the new version - which took the name of Aujourd'hui in 1955. Degand published several texts on J.D. (see Biblio).