LIGHT HOUSES ON GREEK STAMPS (2,3,4) - The Colossus of Rhodes 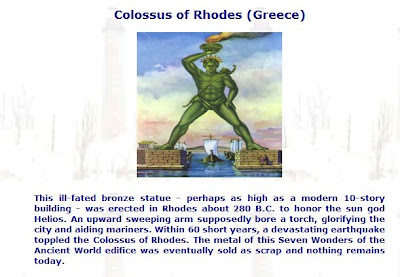 In the period 1947 – 1951 issued a large definitive stamp set to celebrate the return of Dodecanese Islands to Greece. Among the stamps there are three stamps of Colossus of Rhodes.

The statue stood for only 56 years until Rhodes was hit by an earthquake in 226 BC. The statue snapped at the knees and fell over on to the land. Ptolemy III offered to pay for the reconstruction of the statue, but the oracle of Delphi made the Rhodians afraid that they had offended Helios, and they declined to rebuild it. The remains lay on the ground as described by Strabo (xiv.2.5) for over 800 years, and even broken, they were so impressive that many traveled to see them. Pliny the Elder remarked that few people could wrap their arms around the fallen thumb and that each of its fingers was larger than most statues.

In 654, an Arab force under Muslim caliph Muawiyah I captured Rhodes, and according to the chronicler Theophanes the Confessor, the remains were sold to a "Jewish merchant of Edessa". The buyer had the statue broken down, and transported the bronze scrap on the backs of 900 camels to his home. There is compelling evidence, however, that all traces of the Colossus had actually disappeared long before the Arab invasion. Theophanes is the sole source of this story to which all other sources can be traced. The stereotypical Arab destruction and the purported sale to a Jew probably originated as a powerful metaphor for Nebuchadnezzar's dream of the destruction of a great and awesome statue, and would have been understood by any seventh century monk as evidence for the coming apocalypse. The same story is recorded by Barhebraeus, writing in syriac in the 13th century in Edessa (see E.A. Wallis Budge, The Chronography of Gregory Abu'l-Faraj, vol I, p. 98, APA - Philo Press, Amsterdam, 1932): (After the Arab pillage of Rhodes) "And a great number of men hauled on strong ropes which were tied round the brass Colossus which was in the city and pulled it down. And they weighed from it three thousand loads of Corinthian brass, and they sold it to a certain Jew from Emesa" (that is the Syrian city of Homs). 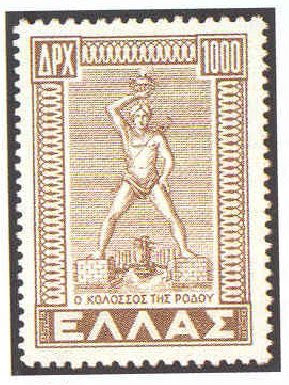 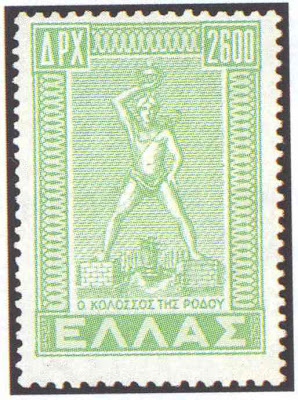 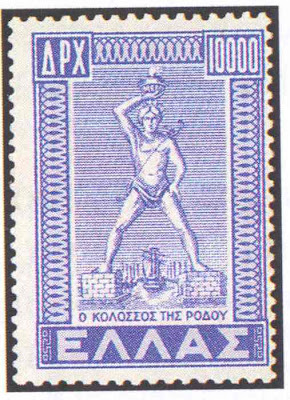 PAPER : The stamps in this set varied from yellow to white