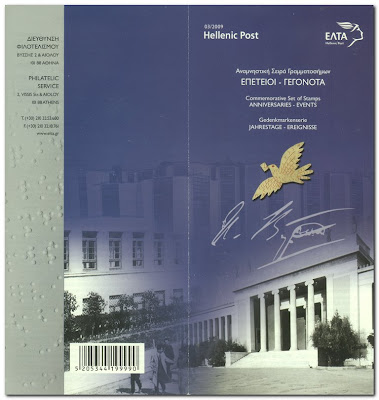 With some delay
I present you here
the STAMP SET No. 3/2009
"ANNIVERSARIES - EVENTS" 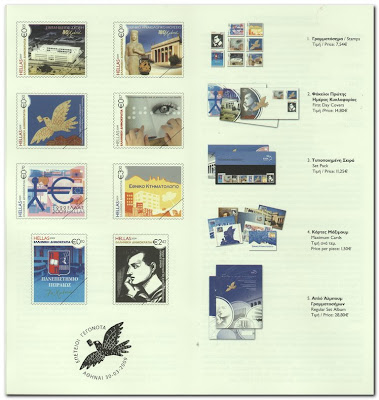 Here is the Data of the stamp set. 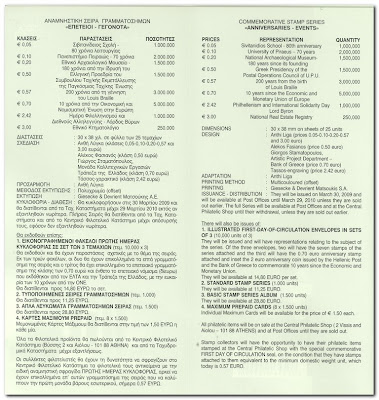 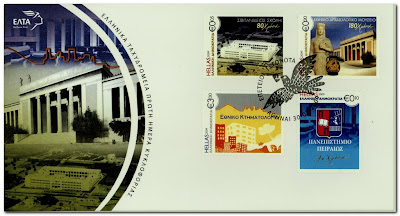 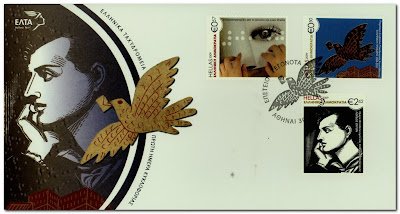 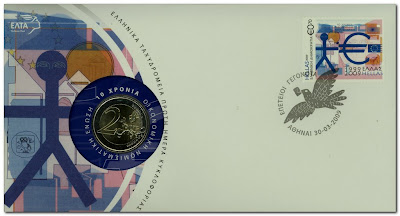 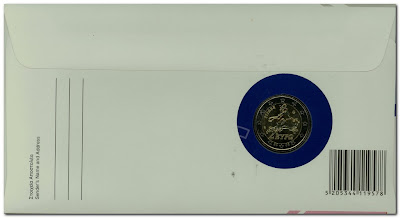 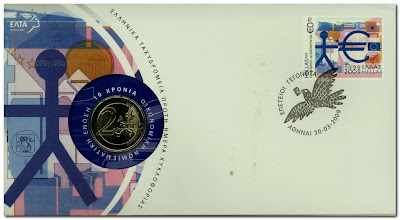 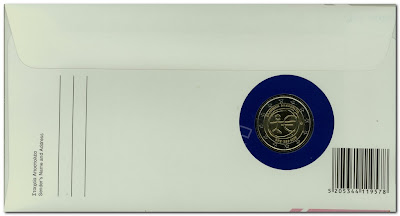 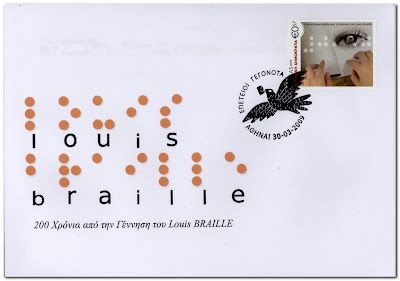 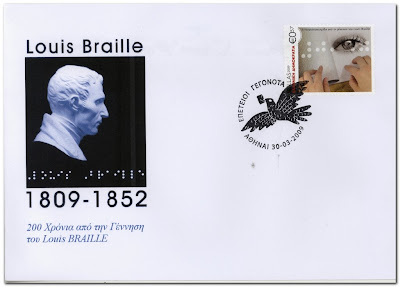 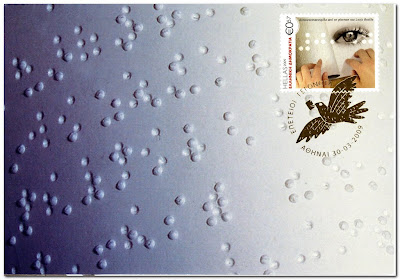 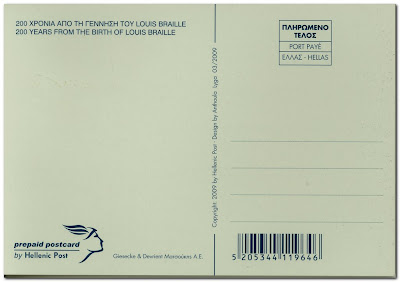 PRESENTATION
OF
THE STAMPS 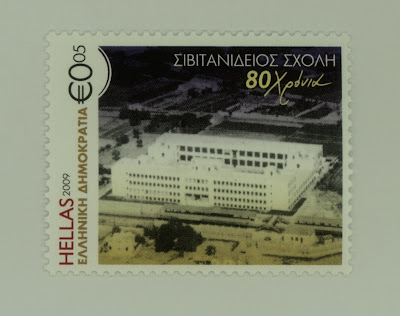 Sivitanidios School is active and present in technical education since 1927. 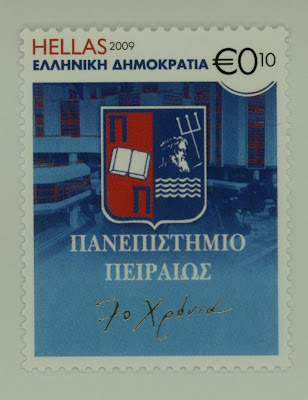 The University of Piraeus was founded in 1938 under the title of the “School for Industrial Studies”, by the Industrialists and Tradesmen Association.

In 1945 it was renamed to “Higher School for Industrial Studies” and its aim was defined to be the systematic, theoretical and practical training of managerial executives.

In 1958, the “Higher School for Industrial Studies» was again renamed to “Graduate School of Industrial Studies”, with its headquarters in Piraeus. Starting from 1966, the University operated in the form of a public legal entity.

In 1989, the “Graduate School of Industrial Studies” was renamed to University of Piraeus.
More info at; 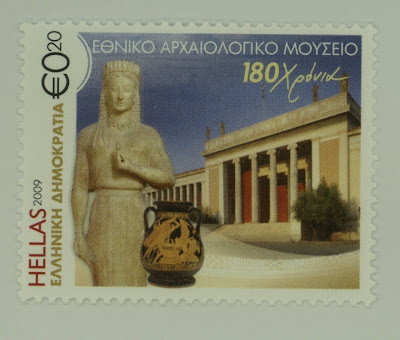 The museum is housed in an imposing neoclassical building of the end of the nineteenth century, which was designed by L. Lange and remodelled by Ernst Ziller. 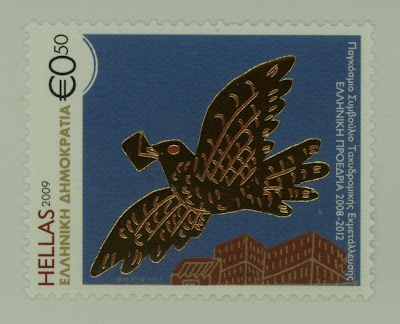 Greek Presidency of the
Postal Operations Council of U.P.U.

Prior to the establishment of the UPU, a country had to conclude a separate postal treaty with each other country that it wished to carry international mail to or from. The United States called for an international postal congress, which was held in 1863. This led Heinrich von Stephan, Royal Prussian and later German Minister for Posts, to found the Universal Postal Union, the third oldest international organization (after the Rhine Commission and the ITU). It was created in 1874, under the name "General Postal Union", as a result of the Treaty of Berne signed on 9 October 1874. In 1878, the name was changed to "Universal Postal Union".

The UPU established that

One of the most important results of the UPU treaty was that it ceased to be necessary, as it often had been previously, to affix the stamps of any country through which one's letter or package would pass in transit; the UPU provides that stamps of member nations are accepted for the whole international route.

After the foundation of the United Nations, the UPU became a specialized agency in the UN.

In 1969 the UPU introduced a new system of payment by which fees were payable between countries according to the difference in the total weight of mail between the respective countries. These fees were called terminal dues. The new system was fairer when traffic was heavier in one direction than the other. As this affected the cost of the delivery of periodicals, the UPU devised a new "threshold" system, which was implemented in 1991.

The system sets separate letter and periodical rates for countries which receive at least 150 tonnes of mail annually. For countries with less mail, the original flat rate has been maintained. The United States has negotiated a separate terminal dues formula with thirteen European countries that includes a rate per piece plus a rate per kilogram, and has a similar arrangement with Canada. The UPU also operates the system of International Reply Coupons and addresses concerns with ETOEs.

The Universal Postal Union, in conjunction with the World Association for the Development of Philately (WADP), has developed the WADP Numbering System (WNS), launched on 1 January 2002. The web site (www.wnsstamps.ch/en/) has entries for some 160 countries and emitting postal entities, with over 25,000 registered stamps since 2002. Many of them have images, which generally remain copyrighted by the issuing country, but which the UPU and WADP permit to be downloaded. 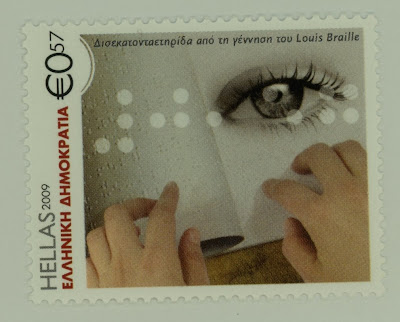 200 years from the birth
of Louis Braille

Louis Braille (English pronunciation: /ˈbreɪl/; French: [bʁɑj]; January 4, 1809 – January 6, 1852) was the inventor of braille, a world-wide system used by blind and visually impaired people for reading and writing. Braille is read by passing the fingers over characters made up of an arrangement of one to six embossed points. It has been adapted to almost every known language. 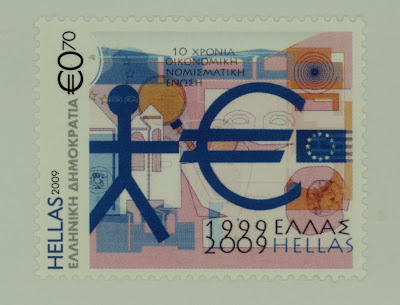 10 years since the European Monetary Union of Europe
The European Economic and Monetary Union (EMU) consists of three stages coordinating economic policy and culminating with the adoption of the euro, the EU's single currency. All member states of the European Union are expected to participate in the EMU. Sixteen member states of the European Union have entered the third stage and have adopted the euro as their currency. The United Kingdom, Denmark and Sweden have not accepted the third stage and the three EU members still use their own currency today. 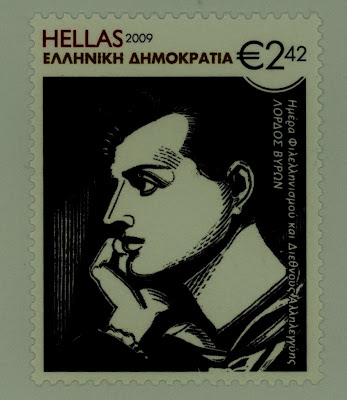 George Gordon Byron, later Noel, 6th Baron Byron FRS (22 January 1788– 19 April 1824) was a British poet and a leading figure in Romanticism. Amongst Byron's best-known works are the brief poems She Walks in Beauty, When We Two Parted, and So, we'll go no more a roving, in addition to the narrative poems Childe Harold's Pilgrimage and Don Juan. He is regarded as one of the greatest European poets and remains widely read and influential, both in the English-speaking world and beyond.

Byron's fame rests not only on his writings but also on his life, which featured upper-class living, numerous love affairs, debts, and separation. He was famously described by Lady Caroline Lamb as "mad, bad, and dangerous to know". Byron served as a regional leader of Italy's revolutionary organization, the Carbonari, in its struggle against Austria. He later travelled to fight against the Ottoman Empire in the Greek War of Independence, for which Greeks revere him as a national hero. He died from a fever contracted while in Messolonghi in Greece. 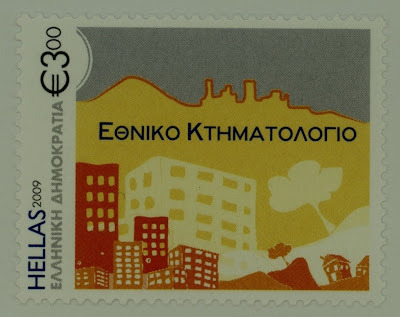 Last year (2008) started in Greece a serious effort in order to be organized the National Real Estate Registry (ethniko ktimatologio)
Posted by kgrek at 10:54 AM