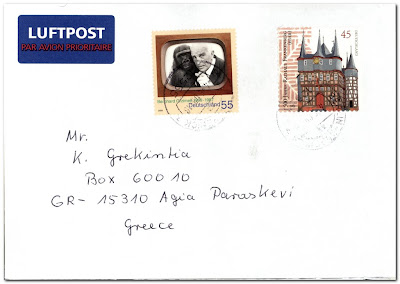 PRESENTATION OF THE STAMPS
A. The TOWNHALL of FRANKENBERG 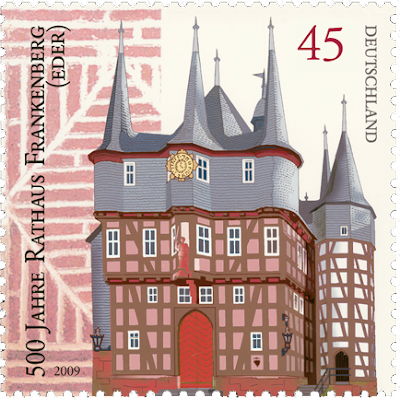 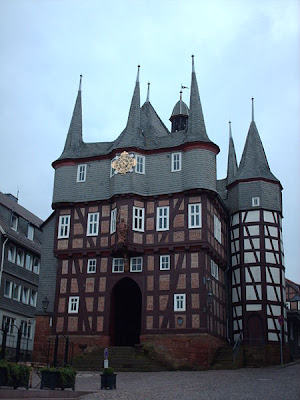 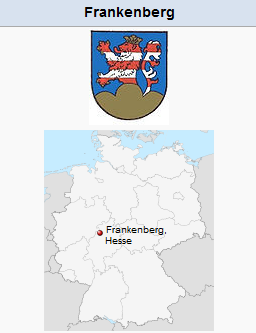 Frankenberg an der Eder is a town in Waldeck-Frankenberg district in Hesse, Germany.

The mountain at a ford over the Eder north of the Burgwald range was for a long time a fortified place, playing an especially important rôle under the Franks in the Saxon Wars. The current town was built in 1233-1234 by the Thuringian Landgrave and quickly earned economic importance for its location at the junction of two trade routes.

In a fire on 9 May, 1476, about which the Frankenberg chronicler Wigand Gerstenberg compiled a detailed description, the town was almost utterly destroyed. Built anew in the 16th century, the town never did recover its former importance.

The downtown core consists of the renovated Old Town and the likewise renovated New Town with many half-timbered houses.

FROM WIKIPEDIA
More info about the town at :
http://en.wikipedia.org/wiki/Frankenberg,_Hesse

Bernhard Grzimek was an early “green warrior,” fighting for the protection of nature and general environmental awareness in Germany. He was born 100 years ago, on April 24 and environmentalists use the celebration of his birthday to draw attention not only to his achievements, but to the various threats facing our planet today.

Grzimek was a trained veterinarian and studied animal behaviour. For over 30 years he was the Director of the Frankfurt Zoo, but was best known for his work with animals on television and his passion for Africa.

According to Manfred Niekisch, Professor for International Nature Conservancy, without the work of Grzimek, the African Serengeti would have been lost.

“The Serengeti would not have become one of the most important nature reserves of the earth, but instead likely eroded from agricultural use and cattle breeding,” commented the academic.

Grzimek is considered a pioneer of nature conservancy in Germany and Africa. He was best known for his popular television show, “A Place for Animals.” Beginning in the 1950s, Grzimek brought live animals into the studio for the broadcast for almost 30 years. Through his immense media popularity he was able to appeal to his audience for the protection of nature and animal species. He also was able to collect millions for his projects in Africa, above all the preservation of the Serengeti National Park.

Grzimek filmed the documentary “The Serengeti Shall Not Die,” in 1959 and won an Oscar for the film in the category "Best Documentary" in 1960.

Grzimek preceded Green Peace in his activism, staging a well-known campaign against the

The Filming of "Serengeti"
(© picture-alliance/dpa)

consumption of Frog Legs. He would “adorn” the menus of restaurants offering the delicacy with stickers from the Zoological Society. He was also known for his quirky behaviour of placing these stickers in every location possible. He was most proud of getting them in any ladies' restrooms.

Grzimek was buried according to his wishes in Tansania, in the Ngorongoro crater next to the grave of his son who died during the shooting in Africa for "Serengeti shall not die".

On the anniversary of his birth, environmentalists and conservationist worldwide recognize his achievements and use the occasion to highlight the plight of endangered species and the numerous threats to the environment today.