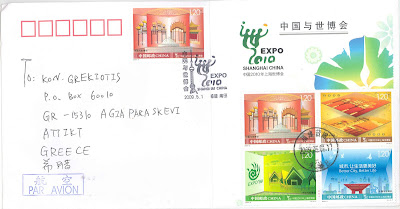 Thank you very much for the nice cover

This stamp set is dedicated to the Expo 2010 held in Shanghai China. Here there are some more information from Wikipedia, the free encyclopedia;

Expo 2010 (simplified Chinese: 2010上海世界博览会) will be held in Shanghai, China and is a scheduled World Expo in the grand tradition of international fairs and expositions. The theme of the exposition will be "Better City – Better Life" and signifies Shanghai's new status in the 21st century as a major economic and cultural center. It is expected to generate the largest number of visitors in the history of the world's fairs in terms of gross numbers.

For the first time in history, the Shanghai 2010 Expo will feature a highly sophisticated online version called "Online Expo Shanghai".

The site of the event is the Nanpu Bridge-Lupu Bridge region in the center of Shanghai along both sides of the Huangpu River. The area of the Expo 2010 covers 5.28 km².