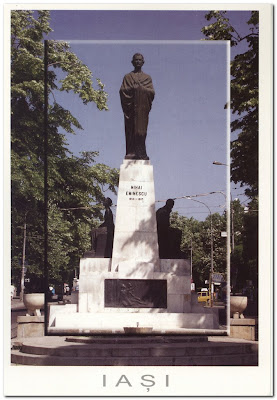 The Romanian poet Mihail Eminescu (1850-1889) inaugurated modern sensitiveness and expression in Romanian poetry through his achievements in content and craftsmanship.

Iaşi (pronunciation in Romanian: /jaʃʲ/) (also historically referred to as Iasio in Greek, IassyFrench or Jassy in German), is a city and municipality in north-eastern Romania. The city was the capital of Principality of Moldavia from the 16th century until 1861 and of Romania (Romanian Kingdom) between 1916–1918 during World War I. in

The second largest Romanian city, Iaşi is the economic, cultural and academic centre of the Romanian region of Moldavia. The city has the oldest Romanian university and accommodates an annual count of over 70,000 students in 5 public and 3 private universities. It is home to more than 50 churches and hosts 5 cultural centres: British, French, German, Latin American & Caribbean and Hellenic. Cultural life gravitates around the National Theater (the oldest in Romania), the Opera House, the Iaşi State Philarmonic, the Tătăraşi Atheneum, a famous Botanical Garden (the oldest and largest in Romania), the Central University Library (the oldest in Romania), an array of museums and memorial houses, an independent theater and several student organizations. 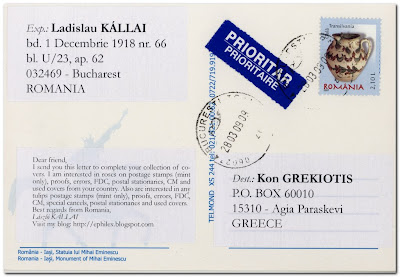 Ladislau has a very intrested blog with roses and tulips at;
http://ephilex.blogspot.com/
Come and visit it
Thank you Ladislau
Posted by kgrek at 11:15 PM