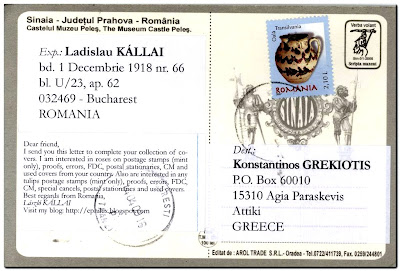 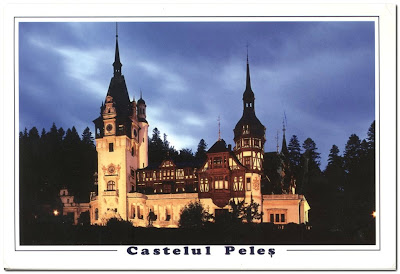 Today a historical monument, Peleş Castle (Romanian: Castelul Peleş /kas'te.lul 'pe.leʃ/) is a Neo-Renaissance castle placed in an idyllic setting in the Carpathian Mountains, near Sinaia, in Prahova County, Romania, on an existing medieval route linking Transylvania and Wallachia, built between 1873 and 1883.

King Carol I of Romania (1839-1914), one of the great Romanian kings and conqueror of the National Independence, first visited the region and future site of the castle in 1866, when he fell in love with the rugged but magnificent mountain scenery. So, in 1872, a total of one thousand "pogoane", approx. 1,300 acres (5.3 km2), is purchased by the king and Piatra Arsa region becomes The Royal Domain of Sinaia, destined to be a hunting preserve and summer retreat for the monarch. On August 22, 1875, the foundation for Peleş Castle, the city of Sinaia, and indeed for the country of Romania itself was established. Several other buildings, annexed to the castle, were built simultaneously: The Guard's Chambers, The Economat Building, The Foişor Hunting Chateau, The Royal Stables. The Power Plant was also constructed then, and Peleş became world's first castle fully operated by electric power. The "Sipot" Villa was constructed later. This would serve as the work site of architect Karel Liman. Liman would later supervise the building of Pelişor chateau (1889-1903, the future residence of King Ferdinand and Queen Marie of Romania), as well as of the King's Ferdinand Vila in the Royal Sheepfold Meadow (the actual Sheepfold Meadow). First three initial design plans for Peleş were copies of other palaces from western Europe but king Carol I rejected them all as they were too costly and unoriginal. Second architect, Johannes Schultz won by presenting a more original plan, something that appealed to the king's taste: a grand palatial alpine villa combining different structures of classic European styles, mostly following Italian elegance and German aesthetics in Renaissance lines. The cost of the castle itself between 1875 and 1914 was estimated to be 16 000 000 gold Romanian lei (approx. $US 120 million today). Between three and four hundred men worked consistently on it.

The first architect was the Viennese Wilhelm von Doderer (1825-1900) and then German Johannes Schultz (1876-1883). Later additions were made between 1893 and 1914 by the Czech architect Karel Liman, who added designed the towers, including the main central tower, 66 m in height.

By form and function, Peleş, is truly a palace but affectionately and consistently called a castle instead, by all. Its architectural style is a Neo-Renaissance of romantic inspiration that can find a corespondent in 19th century ideals with the monumental Gothic Revival of Schloss Neuschwanstein in Bavaria, ironically called a castle as well. A Saxon influence can be observed in the interior courtyard facades that have rich and ornated fachwerk similar to northern Europe alpine architecture and allegorical hand painted murals. Interior decoration is mostly a Baroque influence with heavy carved woods and exquisite fabrics.

Peleş Castle has 3200 sq. meters of floor plan, over 170 rooms,30 bathrooms, many with dedicated themes from world cultures (in similar fashion with other Romanian palaces, like Cotroceni Palace for example), themes that can vary by function (offices, libraries, armouries, art galleries) or by style (Florentine, Turkish, Moorish, French, Imperial) all extremely lavishly furnished and decorated to the slightest detail. The establishment hosts one of the finest collections of art in East and Central Europe, consisting of statues, paintings, furniture, arms and armour, gold, silver, stained glass, ivory, fine china, tapestries and rugs; the collection of arms and armour has over 4000 pieces, divided between Eastern and Western war, ceremonial or hunting spreading over four centuries in history. Oriental rugs come from the finest sources: Bukhara, Mosul, Isparta, Saruk and Smirna, porcelain from Sevres and Meissen, leather from Córdoba but perhaps the most acclaimed are the hand painted stained glass vitralios, mostly Swiss .

A towering statue of King Carol I by Raffaello Romanelli overlooks the main entrance but many other statues are present on the seven Italian neo-Renaissance terrace gardens, mostly of Carrara marble executed by the Italian sculptor Romanelli. The gardens also host fountains, urns, stairways, guarding lions, marble paths and other decorative pieces.

The above article is condenced from the WIKIPEDIA.

More info you can get from: http://en.wikipedia.org/wiki/Pele%C5%9F_Castle