FIINLAND - A POSTCARD FROM SUSANNA 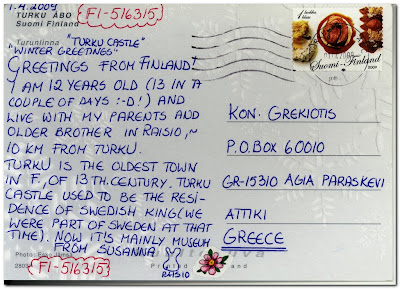 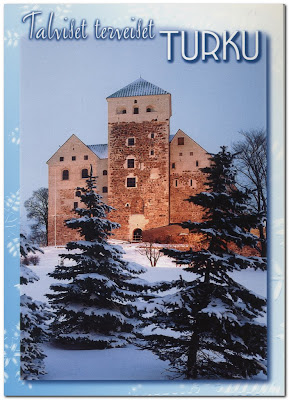 Susanna wrote some info about Turku Castle on the postcard

Here is some more info from Wikipedia

The Turku Castle, (Finnish: Turun linna, Swedish: Åbo slott is a monument of Finnish history situated in the city of Turku in Finland. Together with the Cathedral of Turku, Turku castle is one of the oldest buildings still in use in Finland. Turku castle is the largest surviving medieval building in Finland, and one of the largest surviving medieval castles in Scandinavia. This national monument standing on the banks of Aura river has experienced many stages for more than 700 years.

A start was made on building the castle in about 1280. The Swedish conquerors of Finland intended it originally as a military fortress. During the next two centuries its defences were strengthened and living quarters were added. The castle served as a bastion and administrative centre in Eastland, as Finland was then known, during the swedish period.[1] The main part of the castle was extended considerably during the 16th century after Gustav Vasa had ascended the Swedish throne and his son John headed the Finnish administration following his promotion to duke. The bailey was also supplemented and the round tower at the southeast corner of the bailey was added. Since then no part of the castle has been added or extended, only repaired.

For more info give a glance at;

Thank you Susanna
Posted by kgrek at 4:24 PM