Many thanks to Karim Benmohamed for his nice cover from Algeria and the first day cover he sent me.
Karim is philatelist and the owner of the blog : http://algeriastamps.blogspot.gr/

About the five stamps cover : 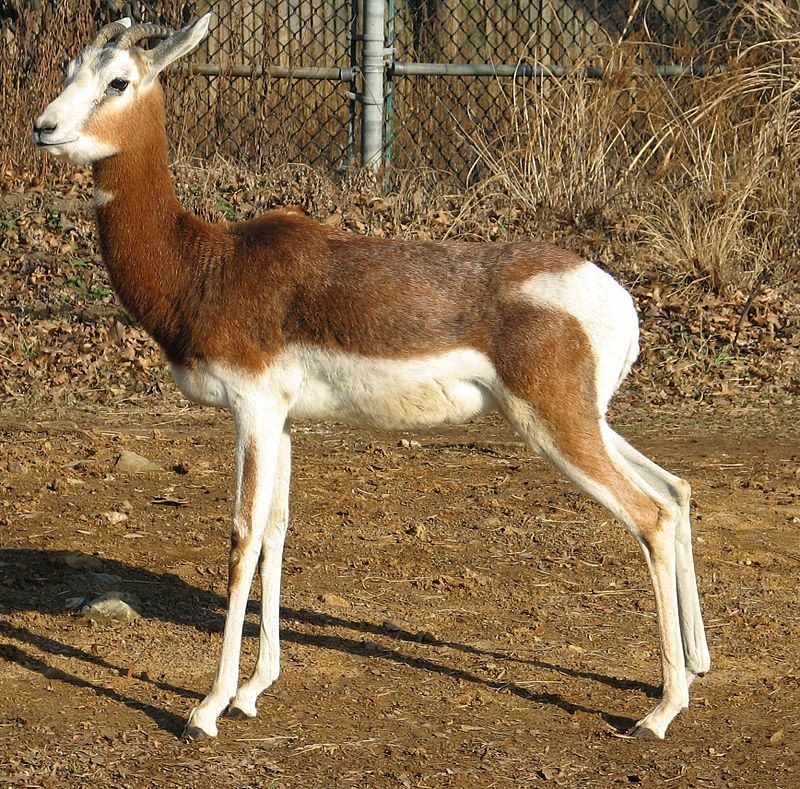 The dama gazelle, addra gazelle, or mhorr gazelle (Nanger dama, formerly Gazella dama) is a species of gazelle. It lives in Africa in the Sahara desert and the Sahel. This critically endangered species has disappeared from most of its former range due to overhunting and habitat loss, and natural populations only remain in Chad, Mali, and Niger. Its habitat includes grassland, shrubland, semi-deserts, open savanna and mountain plateaus. Their diets includes grasses, leaves (especially Acacia leaves), shoots, and fruit. 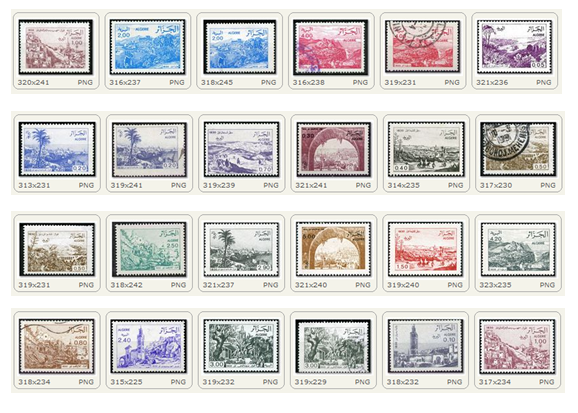 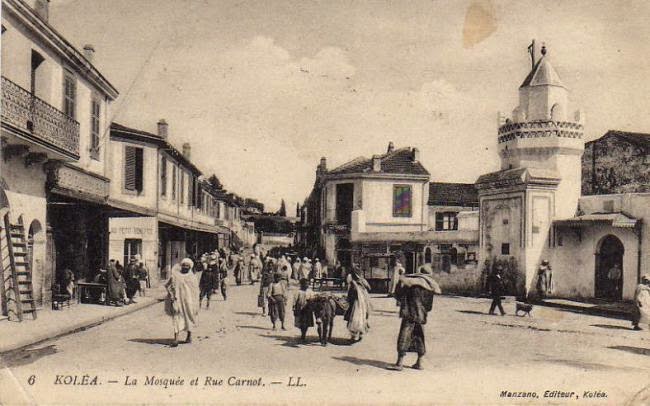 Location of Koléa in Algeria

Kolea is a town in Tipaza Province, northern Algeria, located approximately 20 miles (32 km) southwest of Algiers. It lies on the southern, inland slopes of the coastal hills overlooking the valley of Wadi Mazafran and the Mitidja plain and has a current population of approximately 40,000.

Kolea was founded in the 1550 by Barbarossa, Admiral of the Ottoman Navy and Pasha of Algiers, and originally settled by Andalusian Moors. Its name in Arabic means "little fort".
French Presence

Kolea was held by Abdelkader's forces against the French from 1832 until the former were subdued in 1843. Destroyed by an earthquake in 1825, the town was rebuilt along French lines. The 17th-century mosque of Sidi Embarek was converted into a hospital, but the adjoining qubbah, or shrine, has remained an important place of Muslim pilgrimage. The town is noted for handmade embroidery and lace.

In 1838, Lamoricère moved there with his regiment of Zouaves and built four forts: at Fouka, Tombourouf, Ben Azzouz, and Mokta-Khera. 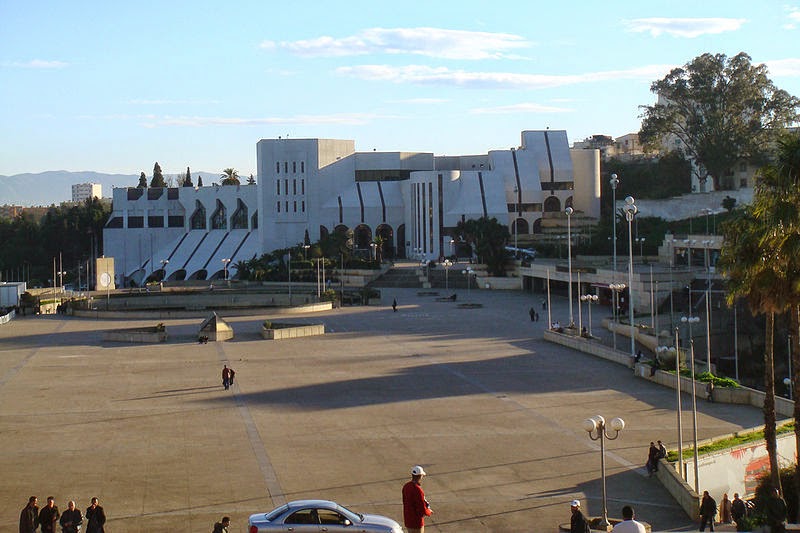 The Central Army Museum, located in Riadh El Feth complex, opposite to the Martyr's Sanctuary contains exhibitions on the history of Algeria resistance through various ages: prehistoric and ancient, medieval, modern and contemporary. 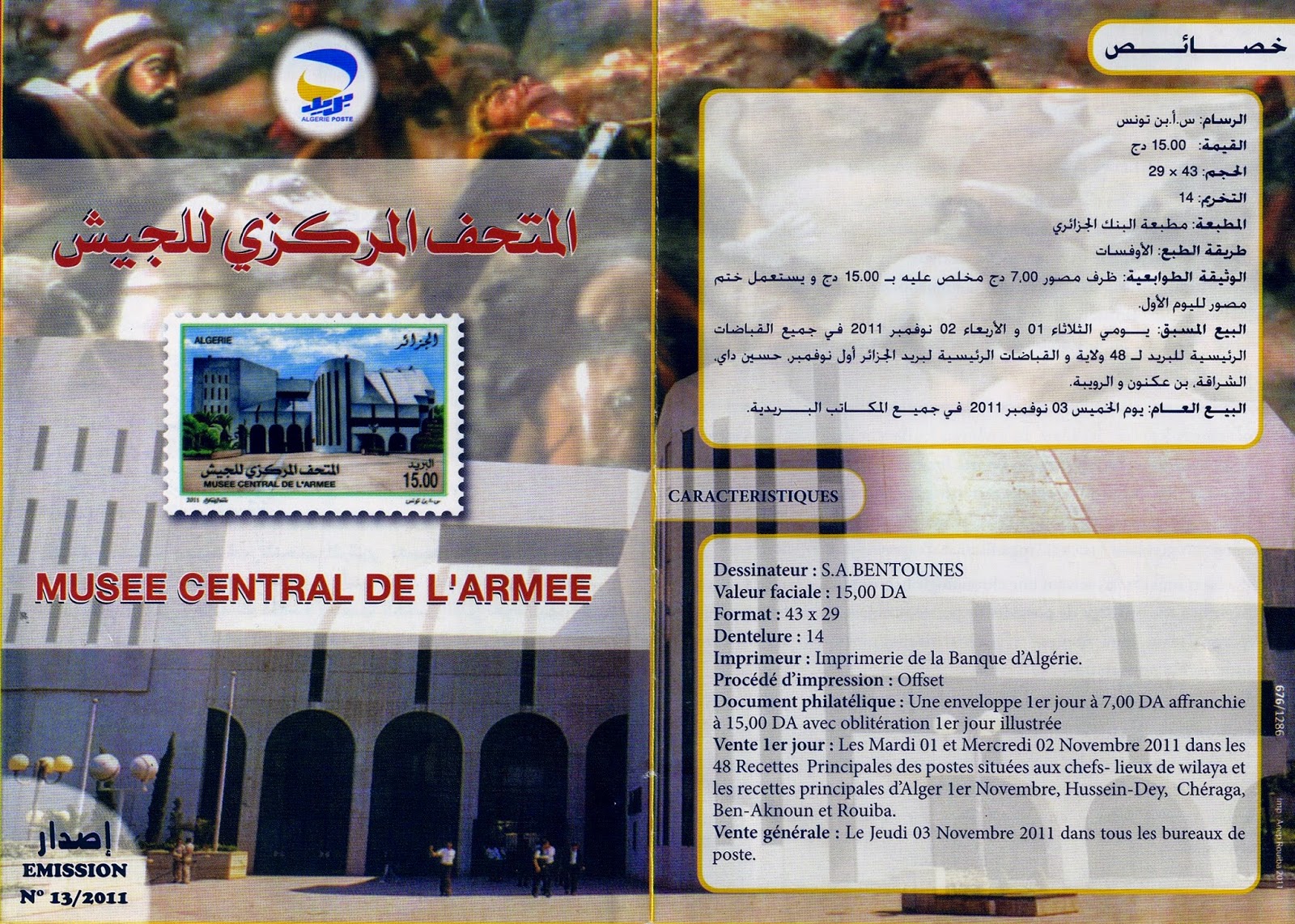 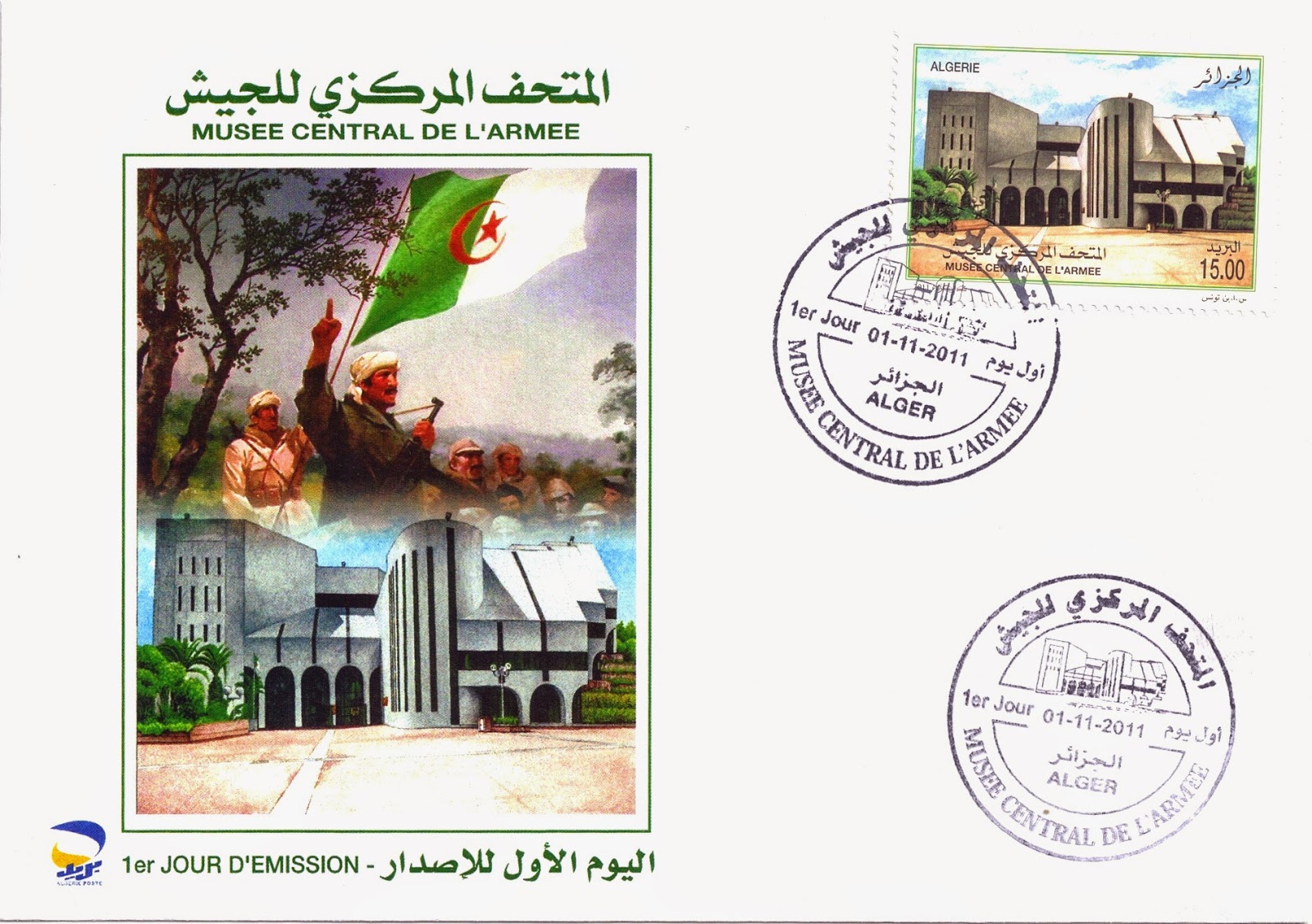 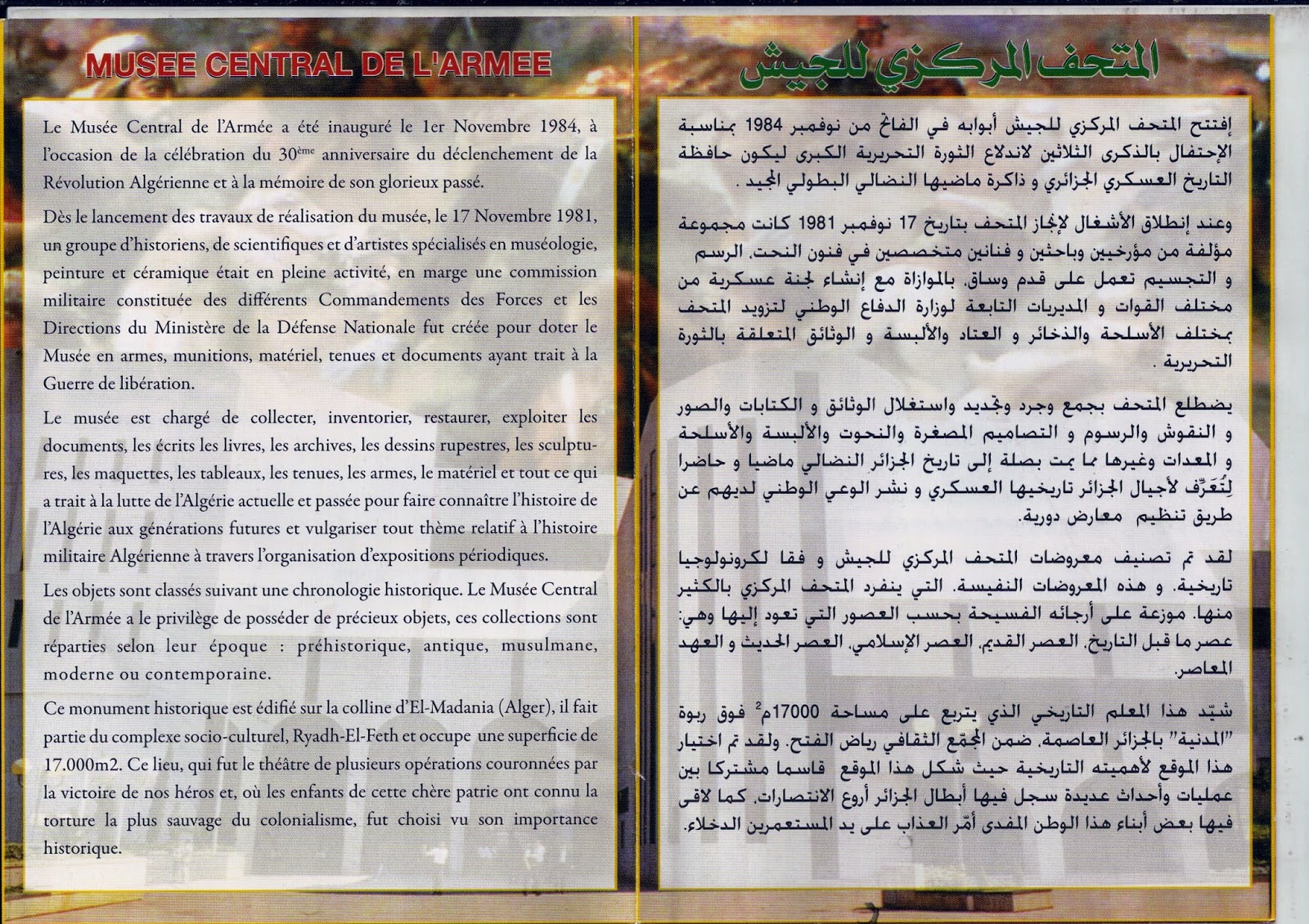 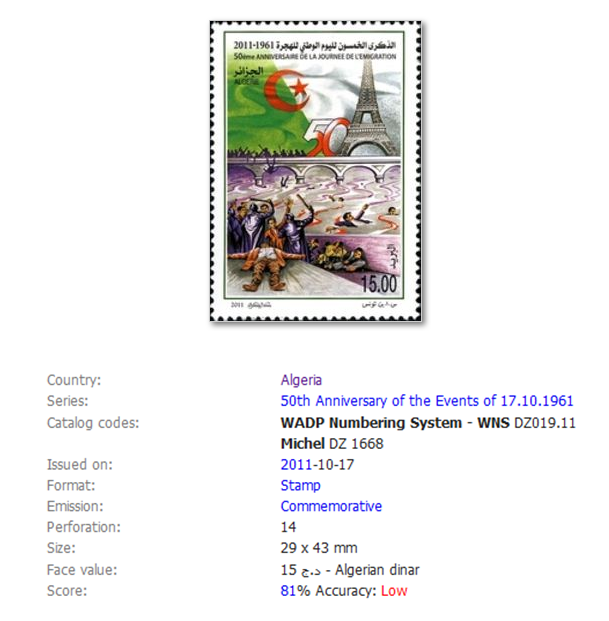 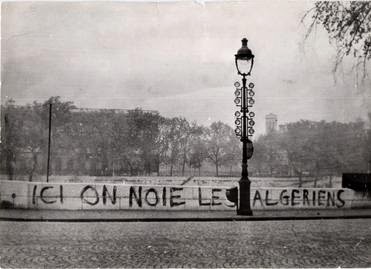 Tagged on the Saint-Michel Bridge in 1961: "Ici on noie les Algériens" ("Here we drown Algerians"). Dozens of bodies were later pulled from the River Seine.

The Paris massacre of 1961 was a massacre in Paris on 17 October 1961, during the Algerian War (1954–62). Under orders from the head of the Parisian police, Maurice Papon, the French police attacked a forbidden demonstration of some 30,000 pro-FLN Algerians. Two months before, FLN had decided to increase the bombing in France and to resume the campaign against the pro-France Algerians and the rival Algerian nationalist organization called MNA in France. After 37 years of denial, in 1998 the French government acknowledged 40 deaths, although there are estimates of over 200. 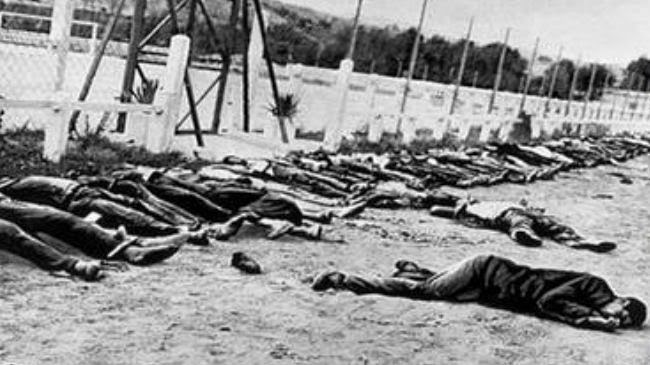 The 17 October 1961 massacre appears to have been intentional, as has been demonstrated by historian Jean-Luc Einaudi, who won a trial against Maurice Papon in 1999 — the latter was convicted in 1998 on charges of crimes against humanity for his role under the Vichy collaborationist regime during World War II. Official documentation and eyewitnesses within the Paris police department indeed suggest that the massacre was directed by Maurice Papon. Police records show that Papon called for officers in one station to be 'subversive' in quelling the demonstrations, and assured them protection from prosecution if they participated. Many demonstrators died when they were violently herded by police into the River Seine, with some thrown from bridges after being beaten unconscious. Other demonstrators were killed within the courtyard of the Paris police headquarters after being arrested and delivered there in police buses. Officers who participated in the courtyard killings took the precaution of removing identification numbers from their uniforms, while senior officers ignored pleas by other policemen who were shocked when witnessing the brutality. Silence about the events within the police headquarters was further enforced by threats of reprisals from participating officers. 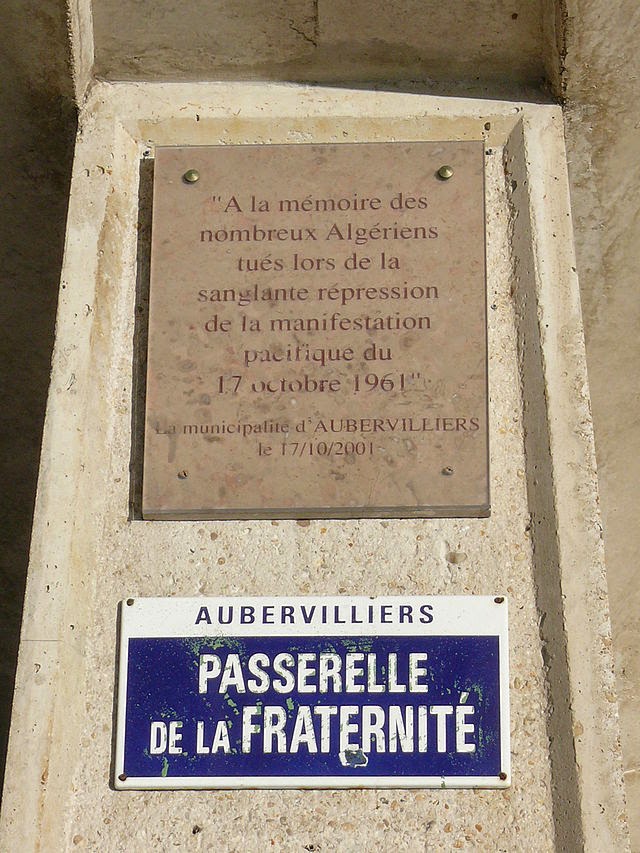 A memorial plaque for Algerians killed on 17 October 1961 by Parisian police officers who were acting under orders of the Prefect of Police, Maurice Papon.


Forty years later, Bertrand Delanoë, member of the Socialist Party (PS) and Mayor of Paris, put a plaque in remembrance of the massacre on the Saint-Michel bridge on 17 October 2001. How many demonstrators were killed is still unclear, but estimates range from 70 to 200 people. In the absence of official estimates, the placard which commemorates the massacre stated: "In memory of the many Algerians killed during the bloody repression of the peaceful demonstration of 17 October 1961". On 18 February 2007 (the day after Papon's death), calls were made for a Paris Métro station under construction in Gennevilliers to be named "17 Octobre 1961" in commemoration of the massacre.