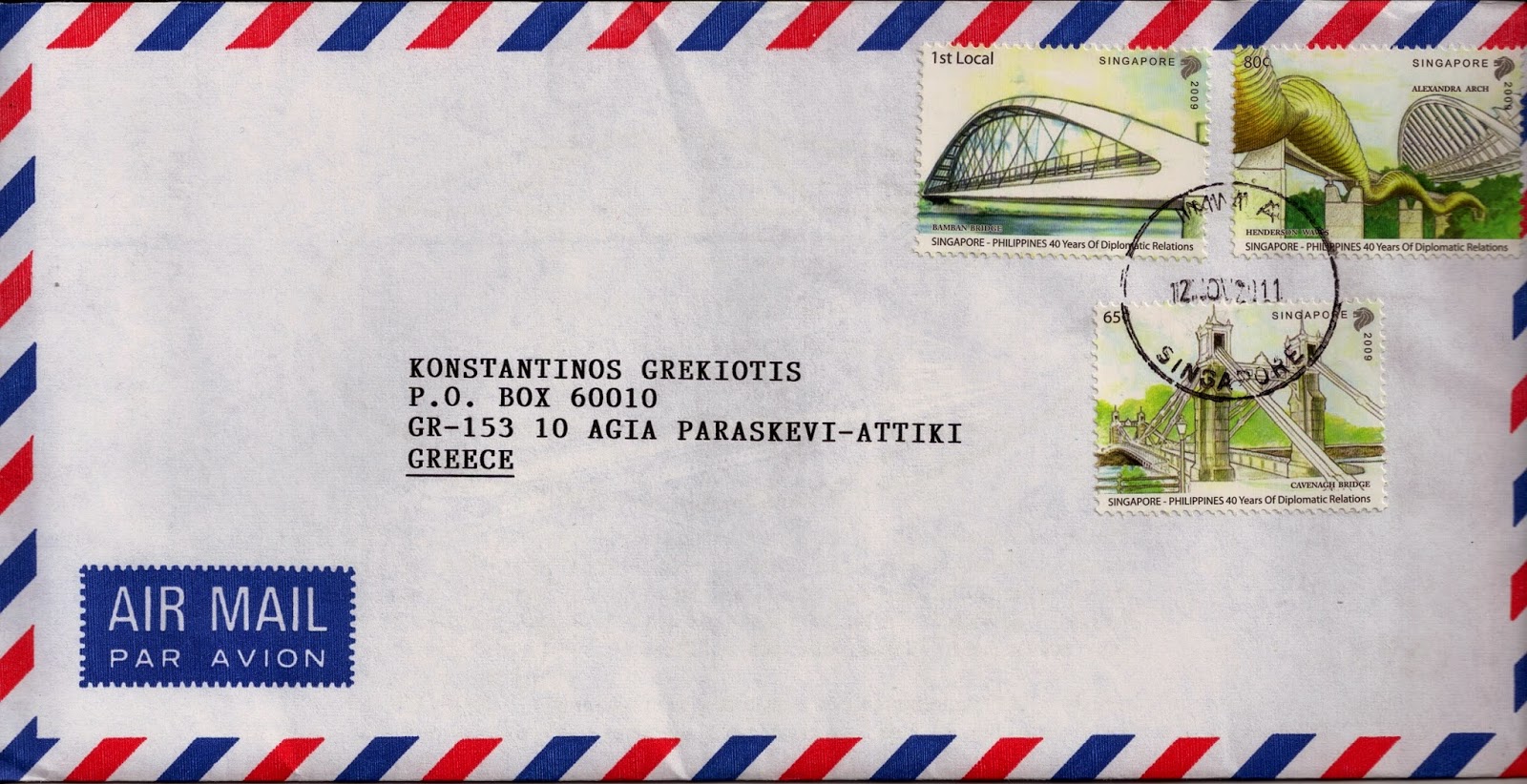 A nice cover fromSingapore through Cover Collectors Circuit Club. There are three stamps from Singapore and Philippines 40 Years of Diplomatic Relations (Bridges)

Thanks to Terence Tan 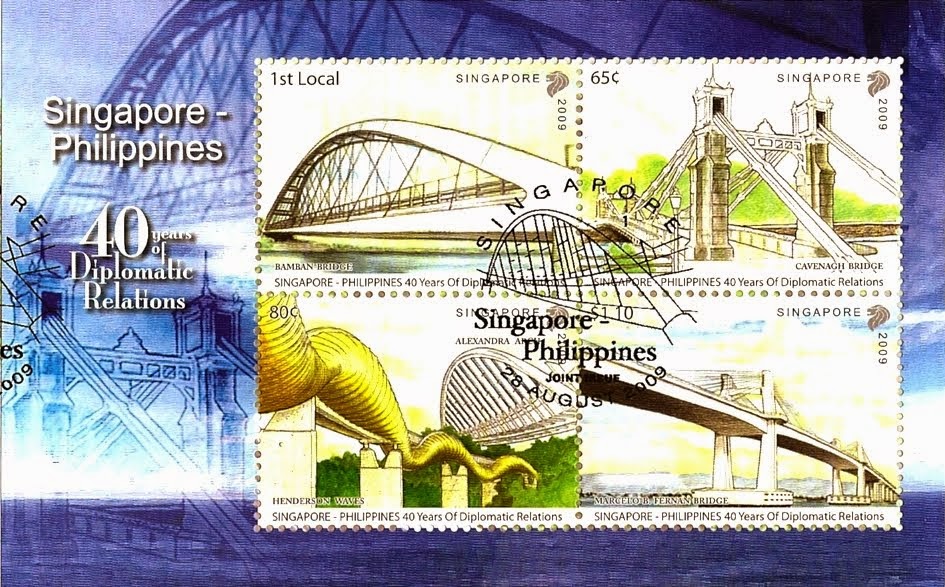 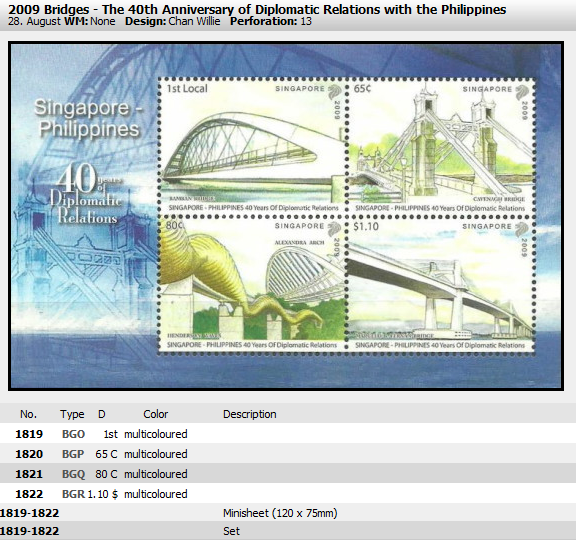 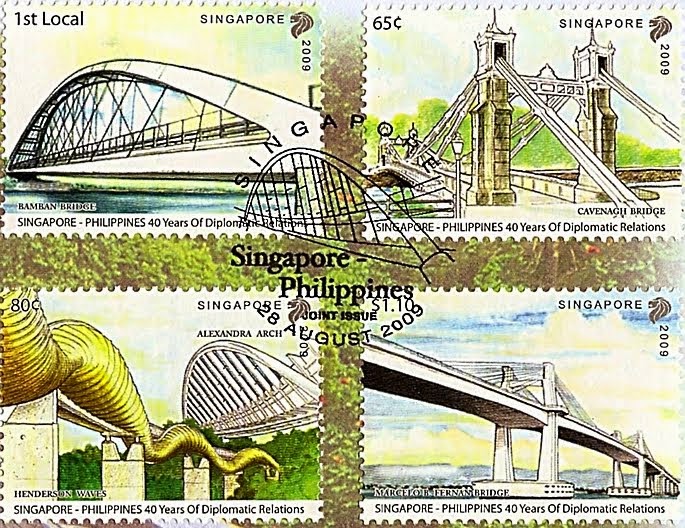 The joint stamp issue with the theme ''Bridges'' 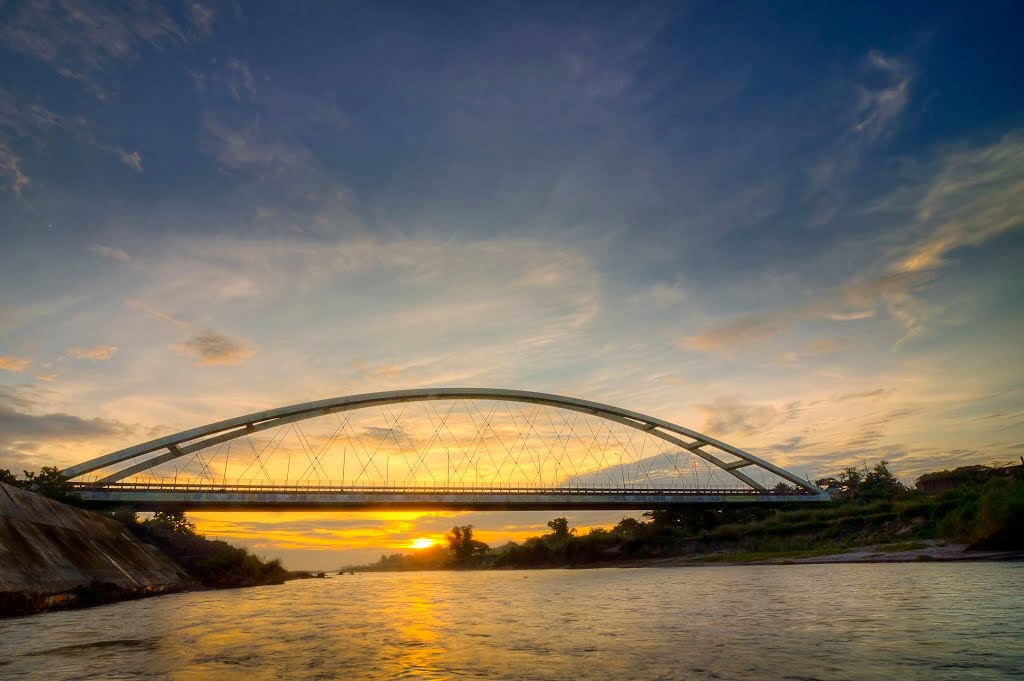 Bamban Bridge', crossing the Sacobia-Bamban River system, along the MacArthur Highway between Mabalacat, Pampanga and Bamban. Tarlac, is one of the modern and sleek-looking bridges in The Philippines. The bridge's arch has a span of 174 metres and contains 1,400 tons of steel. It is one of the longest bridges of its type in the world and was completed sometime around 1998. 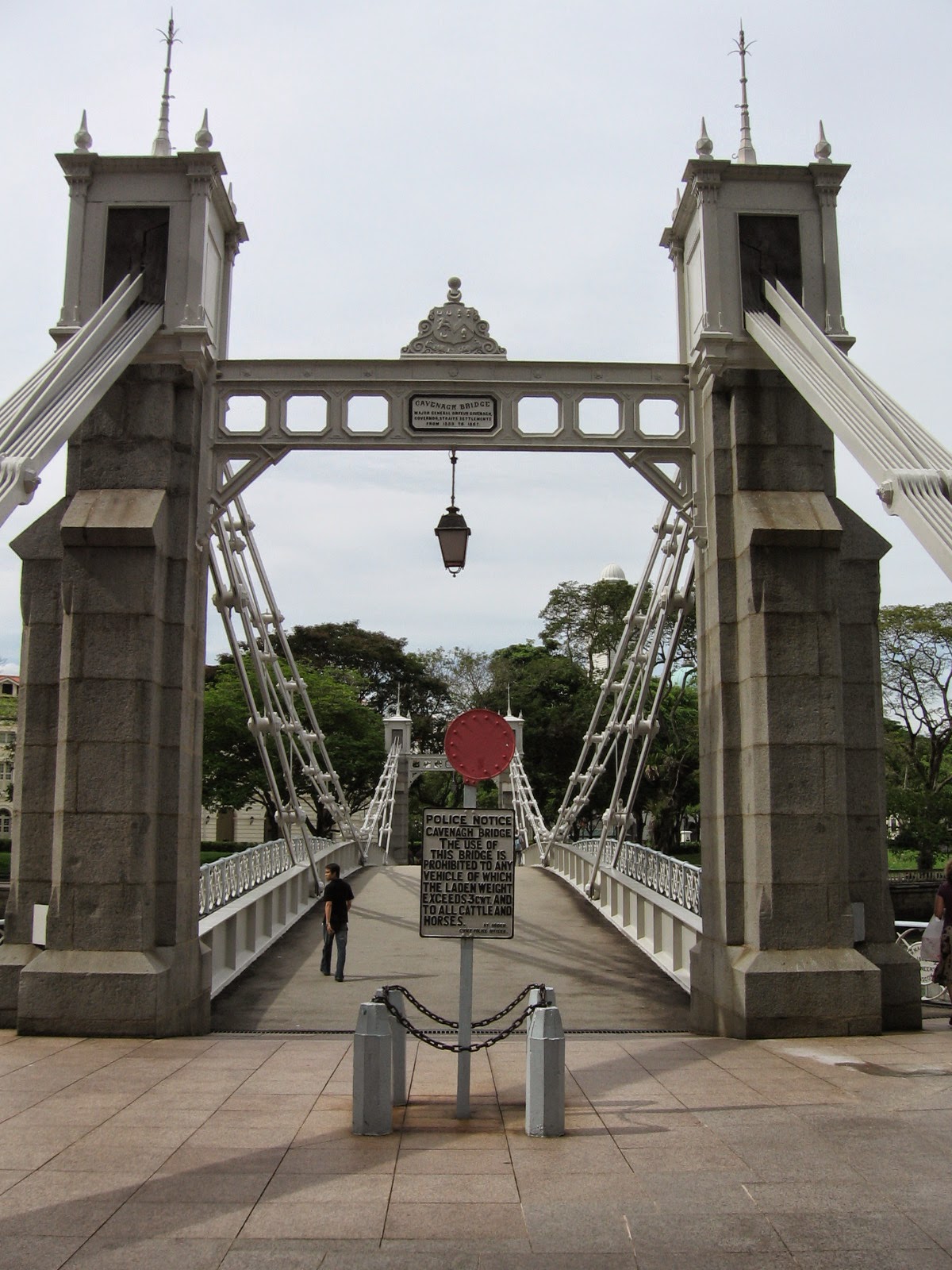 Cavenagh Bridge', built in 1868, is the oldest bridge on the Singapore River. Built to commemorate the 50th Anniversary of the founding of the Crown Colony of the Straits Settlement, it was converted to a pedestrian bridge. Now, with lighting added in the 1990s to accentuate its architectural features at nightfall, it provides the most convenient pedestrian link between the cultural district at the north bank and the commercial district to the south of the Singapore River. 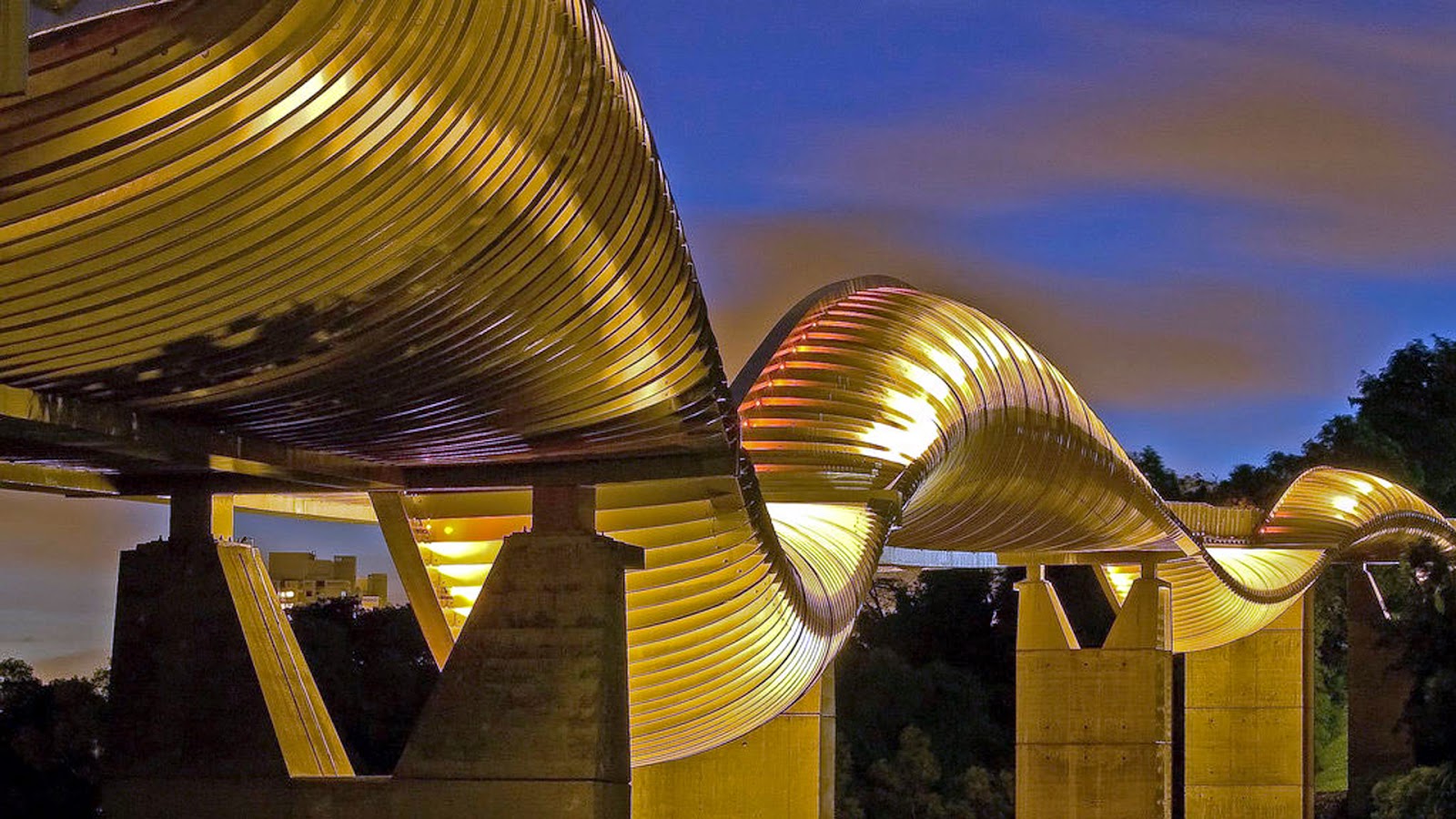 Henderson Waves (亨德森波浪桥)) is a 274-metre (899 ft)[4] long pedestrian bridge. At 36 metres (118 ft) above Henderson Road, it is the highest pedestrian bridge in Singapore. It connects Mount Faber Park and Telok Blangah Hill Park. It was designed by IJP Corporation, London, and RSP Architects Planners and Engineers (PTE) ltd Singapore.


The bridge has a wave-form made up of seven undulating curved steel ribs that alternately rise over and under its deck. The curved ribs form alcoves that function as shelters with seats within. Slats of yellow balau wood, an all-weather timber found in Southeast Asia, are used in the decking. The wave-forms are lit with LED lamps at night from 7pm to 2am daily 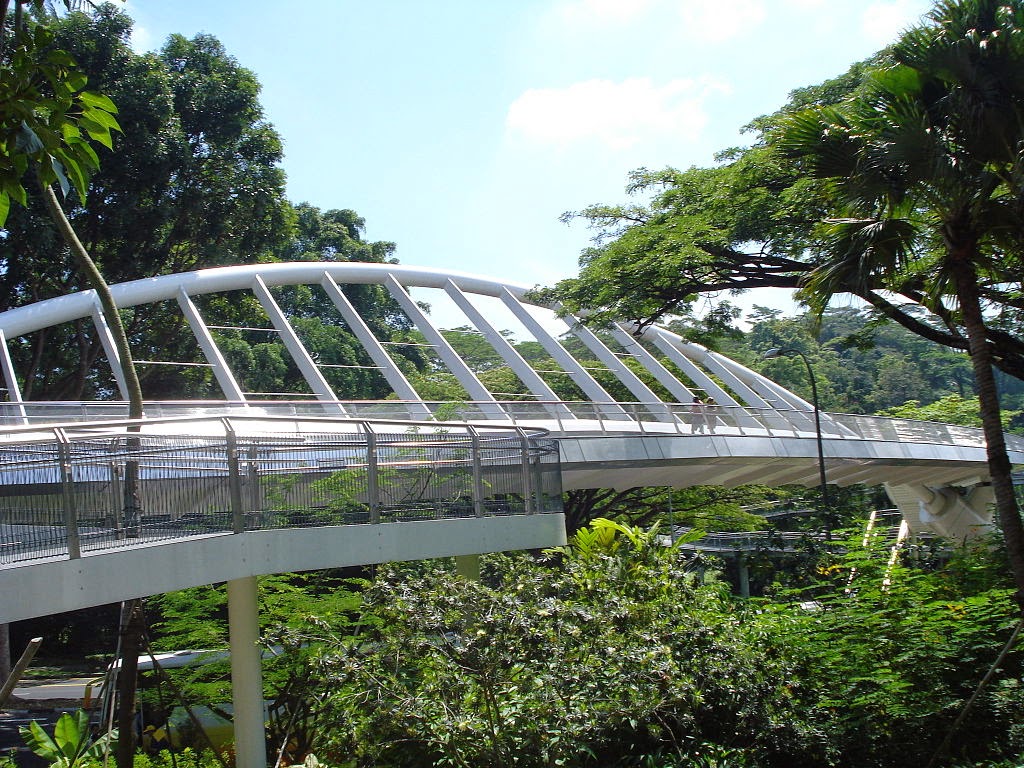 Alexandra Arch (亚历山大拱桥)) is an 80-metre (260 ft) long bridge that features a curved deck and tilted arch like an opened leaf, connecting Alexandra Road, Singapore and Hyderabad Road. It was designed by Buro Happold with LOOK Architects. The Gillman Village, which was a former British military camp in the early 20th century, now houses a mixture of restaurants, pubs and art galleries. Like the Henderson Waves bridge, Alexandra Arch will be lit with colour-changing LED lamps. At the end of the Alexandra Arch, there is a path lined with flowering plants which leads to the HortPark. 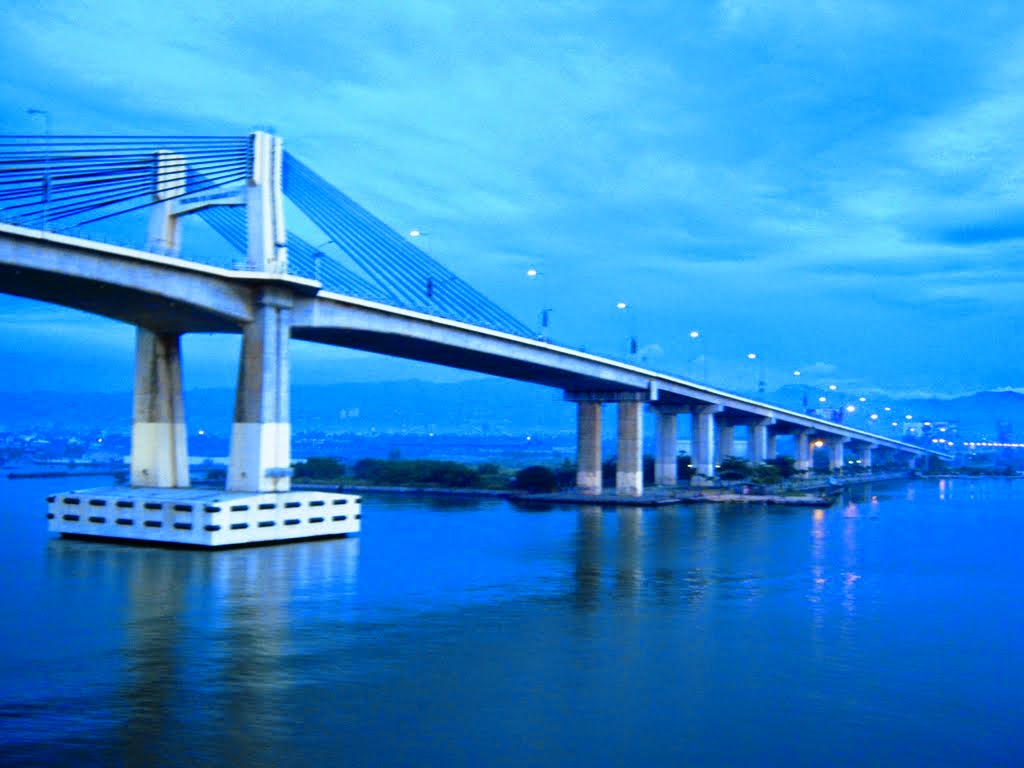 Marcelo Fernan Bridge' is an extradosed cable-stayed bridge located in Metro Cebu, Cebu in the Philippines. It spans across Mactan Channel connecting Cebu Island to Mactan Island. Opened in August 1999 to decongest the traffic from the older Mactan-Mandaue Bridge, the bridge has a total length of 1237 metres with a centre span of 185 metres. This bridge is one of the widest and longest bridge span in the Philippines, and is named after Senator Marcelo Fernan from Cebu City.