Many thanks to Bryon Peterson  for his kindness to send me this cover while he was traveling to Canada.

The stamp on the cover  was issued on 1st February 2011 and is dedicated to the black journalist Carrie Best. On the envelope there are also two cinderella stamps* The stamp is the one of two stamps set. The other one (info below) is dedicated to Fergie Jenkins
(*) In philately, a cinderella stamp is "virtually anything resembling a postage stamp, but not issued for postal purposes by a government postal administration..." The term also excludes imprinted stamps on postal stationery. 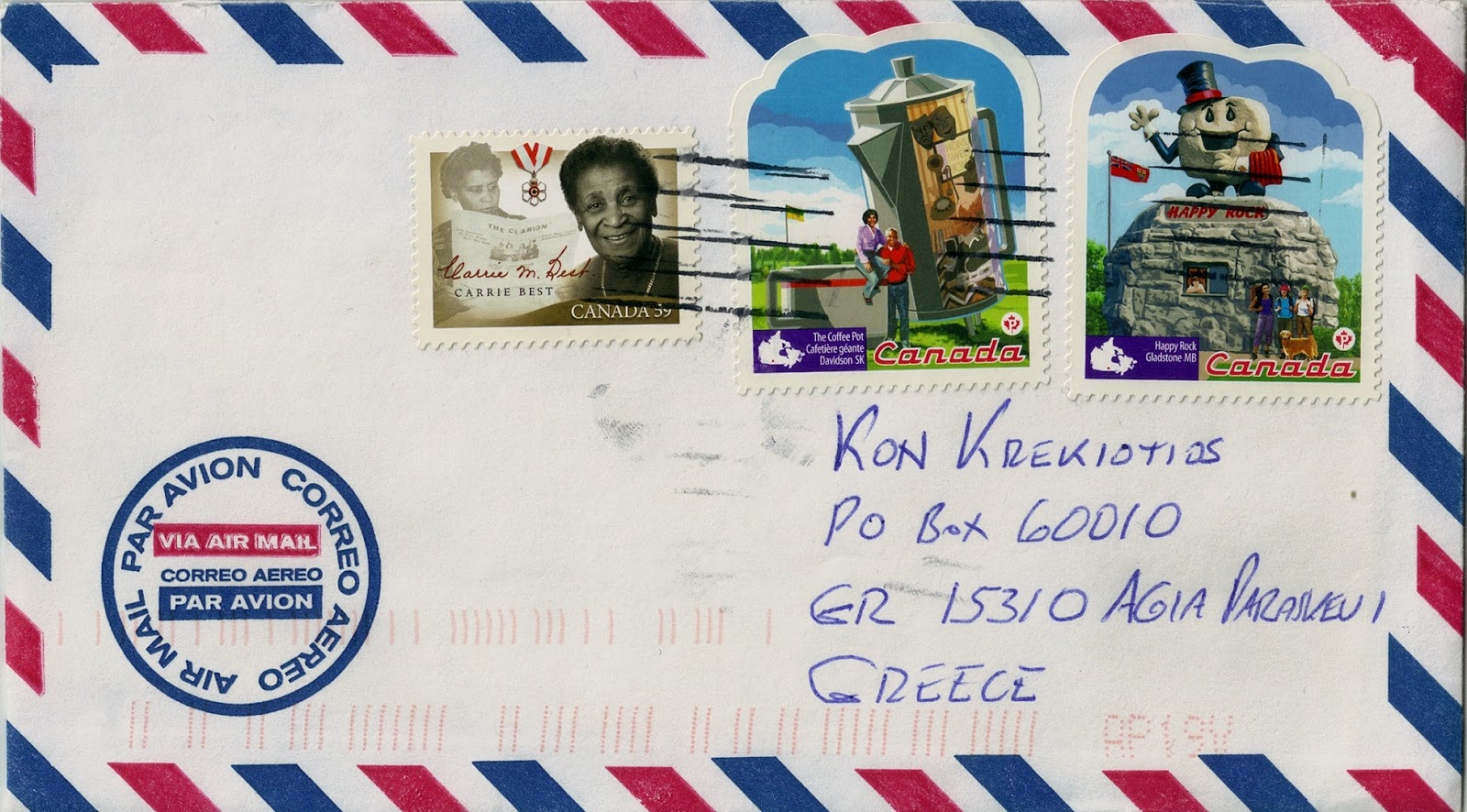 Born in New Glasgow, Nova Scotia, a daughter to James and Georgina Ashe Prevoe, she married Albert T. Best in 1925. In 1946 she founded The Clarion, the first black-owned and published Nova Scotia newspaper. In her first edition she broke the story of Viola Desmond.[1] In 1952 she started a radio show, The Quiet Corner, which was aired for 12 years. From 1968 to 1975 she was a columnist for The Pictou Advocate, a newspaper based in Pictou, Nova Scotia.

In 1977, she published an autobiography, That Lonesome Road.

In 1974, she was made a Member of the Order of Canada and was promoted to Officer in 1979. She was posthumously awarded the Order of Nova Scotia in 2002

Born in New Glasgow, Nova Scotia, on March 4, 1903, Carrie Best came into a world where the odds were stacked against a woman of colour. When she passed away in 2001, her work as a poet, author, journalist and fearlessly determined activist had done much to bring positive change to black Canadians.

In 1946, a black woman named Viola Desmond mistakenly sat in the “whites-only” section of a theatre, and was arrested, convicted and fined. Earlier that year, Best had established The Clarion, one of Nova Scotia’s first newspapers for Black Canadians. Together the two women lobbied the provincial government to repeal its segregation laws, which it did in 1954.

In 1954, Best’s radio program, The Quiet Corner, hit the airwaves. From the late 1960s to 1975, she wrote a column on human rights for the Pictou Advocate and spoke out against, among other things, substandard conditions on native reserves and discrimination against black property owners.

Carrie Best, a role model for generations of black Canadian women, was a Member of the Order of Canada and served on the Task Force on the Status of Woman. She was awarded the Queen Elizabeth Medal, several honourary doctorates, and many other awards.

Ferguson “Fergie” Arthur Jenkins was born on December 13, 1942, in Chatham, Ontario. He excelled at sports in school and played bantam baseball as a teenager. His pitching abilities were encouraged by Gene Dziadura, a shortstop in the Philadelphia Phillies minor league system who scouted for the team. Recognizing Fergie’s natural abilities, the Phillies signed him in 1962.

Fergie Jenkins is the only Canadian honoured in the National Baseball Hall of Fame in Cooperstown, NY (inducted July 21, 1991). He was inducted to the Canadian Baseball Hall of Fame in 1987. He holds the 12th highest strikeout total in history (3,192). Fergie earned 49 career shutouts, won the Cy Young award in 1971, and in 2000, he established his charitable foundation, The Fergie Jenkins Foundation. In 2004, he received an honourary doctorate from McMaster University in Hamilton, Ontario, and in 2007, Fergie was invested into the Order of Canada.

Designer Lara Minja, of Lime Design, in Victoria, BC, notes “The determination, strength, integrity and pride of Fergie Jenkins and Carrie Best are the attributes I aspired to bring to these stamps. The design balances a more recent depiction with an image from the past. A photograph of a more mature Jenkins is overlapped by an image of him on the pitcher’s mound. Carrie Best smiles warmly in her portrait, sitting opposite an image of herself reading the newspaper she established. Both stamps incorporate Order of Canada icons, as well as the names and signatures of Jenkins and Best to personalize the design.”

According to Stamp Design Manager, Liz Wong, “In previous Black History issues, due to the eras in which our subjects lived, usable photographs were simply not available. We were limited to an illustrative approach. Both Best and Jenkins were of a younger generation, so we could choose from a far richer range of imagery.”