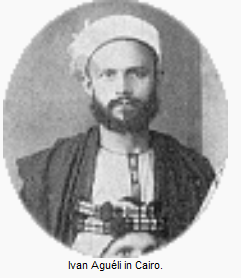 SOUVENIR SHEET OF 1969
DEDICATED TO THE
PAINTER IVAN AGUELI 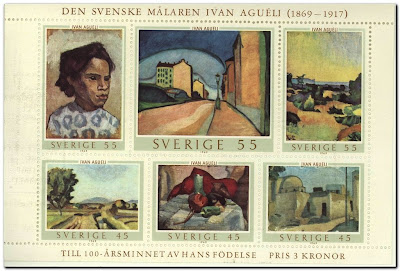 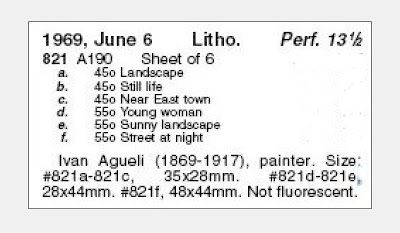 Ivan Aguéli
Ivan Aguéli (born John Gustaf Agelii) (May 24, 1869 - October 1, 1917) also named Sheikh 'Abd al-Hadi Aqhili (Arabic: شيخ عبد الهادی عقیلی‎) upon his acceptance of Islam, was a Swedish-born wandering Sufi, painter and author. As a devotee of Ibn Arabi, his metaphysics applied to the study of Islamic esoterism and its similarities with other esoteric traditions of the world. He was the initiator of René Guénon into Sufism and founder of the Parisian AL Akbariyya society. His art was a unique form of miniature Post-Impressionism where he used the blend of colours to create a sense of depth and distance. His unique style of art made him one of the founders of the Swedish contemporary art movement.
Aguéli's art heritage
In Sweden, Aguéli is admired as one of its most prominent contemporary painters and his paintings are considered to be national treasures. Most of his paintings are found at the Swedish National Museum of Fine arts, the Museum of Modern Art and the Aguéli museum.
Aguélis prominence in Sweden was clearly shown in 1969 when, at the centenary of his birth, six of his paintings were printed as stamps by the Swedish Postal Service.
Aguéli's remains were kept in Barcelona, Spain until 1981, when he was brought back to Sweden and re-buried with Islamic rites in his hometown of Sala alongside the central Church of Kristina, named after Queen Christina of Sweden (known for what was seemed as an eccentric interest in alchemy and for having abdicated her throne in order to change her name, set off to Rome and openly practice her previously secret Catholicism).