CANADA - POSTCARD FROM A FRIEND 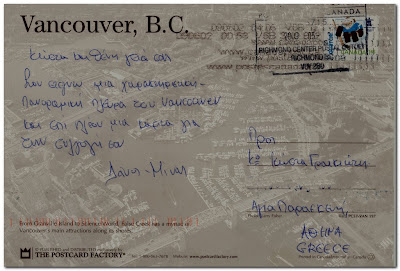 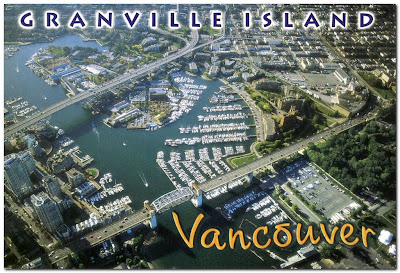 From Granville island to Science World,
False Creek has a myriad
of Vancouver's main attractions along its shores. 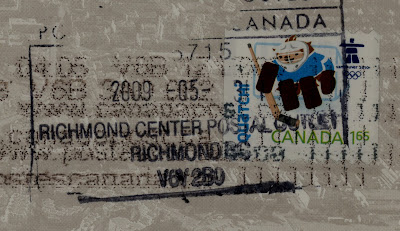 Some 3,000 years have passed since the first Olympic Games, but the lustre of this celebration remains unrivalled today. It is now, as it was then, the ultimate sporting goal—the pinnacle of athletic accomplishment.

Of the two PERMANENT™ domestic rate stamps, one features the Vancouver 2010 Olympic Winter Games emblem, which is a contemporary interpretation of the inukshuk—a traditional Inuit sculpture that provides guidance to travellers. The other features the Vancouver 2010 Paralympic Winter Games emblem, an image that embodies the harmony between athlete, the sport and the environment.

The blue and green colour scheme in the stamps’ background represents the Vancouver 2010 Sea to Sky theme—a concept linking the scenic coastal city with Whistler’s majestic ski slopes. An added dash of creativity makes these domestic definitives extra special. Danielle Trottier, Manager of Stamp Design and Production at Canada Post, explains, “For the first time ever, two different stamps will alternate throughout the same coil.”

The Vancouver 2010 mascots—Miga, Quatchi and Sumi—were inspired by British Columbia’s iconic geography and are rooted in Aboriginal legend. Together, they capture the spirit of Vancouver and Canada.

Sumi*, an animal guardian spirit, is the Vancouver 2010 Paralympic mascot and is found curling on the oversize denomination stamp. Miga is a sea bear who transforms from orca whale to white Kermode bear. She shows off her ski tricks on the US rate stamp. Quatchi, a shy, adventurous sasquatch, plays hockey on the international rate stamp.

The stamps’ designers, Naomi Broudo and Violet Finvers of Vancouver’s Tandem Design, were quickly drawn in by these whimsical creatures. “We really enjoyed getting acquainted with the mascots,” says Broudo. “They’re all so interesting and their energy is contagious; we wanted to use the stamps and souvenir sheet to share this vitality with others.” Their sense of connection with the mascots runs especially deep. “They’re so tied to Canada’s West Coast, as are we,” Broudo elaborates. “From their favourite pastimes to the tradition of First Nation legends that inspired their creation, they really speak to the lively atmosphere and rich history of the region.”

Get acquainted with the mascots and share your Olympic Spirit with the world.

To meet the mascots and learn more about the Vancouver 2010 Olympic and Paralympic Winter Games, visit vancouver2010.com

*NOTE: Issue date for the oversize denomination stamp, souvenir sheet of five and associated official first day cover: February 12, 2009. The date for the oversize denomination stamp issue differs from the other stamps in this series to mark the one-year countdown to the start of the Vancouver 2010 Olympic and Paralympic Games.