FRANCE - COVER GIFT FROM A FRIEND 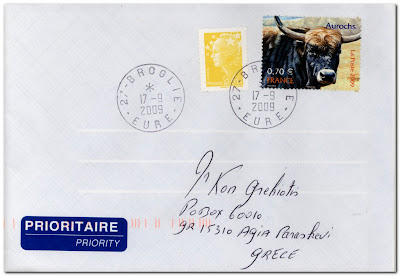 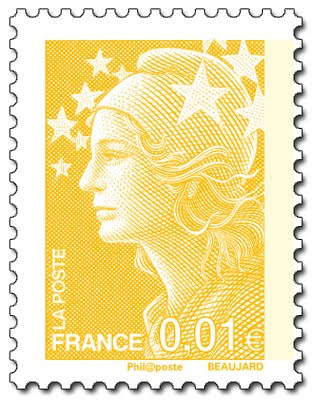 Marianne
Marianne, a national emblem of the French Republic, is, by extension, an allegory of Liberty and Reason. She represents France as a state, and its values (as opposed to the "Gallic rooster" representing France as a nation and its history, land and culture). She is displayed in many places in France and holds a place of honour in town halls and law courts. She symbolises the "Triumph of the Republic", a bronze sculpture overlooking the Place de la Nation in Paris. Her profile stands out on the official seal of the country, is engraved on French euro coins and appears on French postage stamps; it also was featured on the former franc currency. Marianne is one of the most prominent symbols of the French Republic. The origins of Marianne, depicted by artist Honoré Daumier, in 1848, as a mother nursing two children, Romulus and Remus, or by sculptor François Rude, during the July Monarchy, as an angry warrior voicing the Marseillaise on the Arc de Triomphe, are uncertain. In any case, she has become a symbol in France: considered as a personification of the Republic, she was often used on pro-Republican iconography — and heavily caricatured and reviled by anti-Republicans. Although both are common emblems of France, neither Marianne nor the rooster enjoys official status: the flag of France, as named and described in Article 2 of the French constitution, is the only official emblem.
from Wikipedia
http://en.wikipedia.org/wiki/Marianne 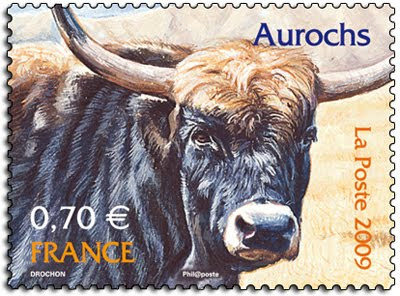 The aurochs or urus (Bos primigenius) was a type of wild cattle, the ancestor of domestic cattle. It inhabited Europe, Asia and North Africa, but is now extinct; it survived in Europe until 1627.

The aurochs was far larger than most modern domestic cattle, being approximately 2 metres (6.6 ft) at the shoulder and weighing 1,000 kilograms (2,200 lb). Domestication occurred in several parts of the world at roughly the same time, about 8,000 years ago. The aurochs featured in ancient cave art, and more recently it was regarded as a challenging quarry animal, this contributing to its extinction. In the 20th century a breed of modern cattle was created that resembles a small aurochs.

According to the Paleontologisk Museum, University of Oslo, aurochs evolved in India some two million years ago, migrated into the Middle East and further into Asia, and reached Europe about 250,000 years ago.[12] They were once considered a distinct species from modern European cattle (Bos taurus), but more recent taxonomy has rejected this distinction. The South Asian domestic cattle, or zebu, descended from a different group of aurochs at the edge of the Thar Desert in India; this would explain zebu's resistance to drought. Domestic yak, gayal and Javan cattle do not descend from aurochs. Modern cattle have become much smaller than their wild forebears: aurochs were about 1.75 metres (5.7 ft) tall, while a large domesticated cow is about 1.5 metres (4.9 ft) and most domestic cattle are much smaller than this.[13] Aurochs also had several features rarely seen in modern cattle, such as lyre-shaped horns set at a forward angle, a pale stripe down the spine, and sexual dimorphism of coat color. Males were black with a pale eel stripe or finching down the spine, while females and calves were reddish (these colours are still found in a few domesticated cattle breeds, such as Jersey cattle). Aurochs were also known to have very aggressive temperaments and killing one was seen as a great act of courage in ancient cultures.

All philatelic info from:
http://www.laposte.fr/ecommerce/La-Boutique-du-Timbre/Site-La-boutique-du-timbre
Posted by kgrek at 12:26 AM