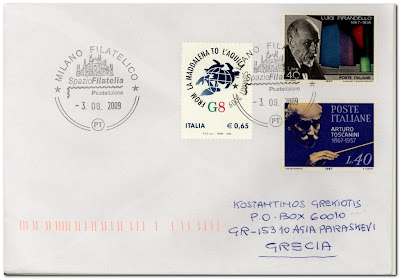 THE STAMPS AND THE EVENTS

G8 Summit
Issue of a stamp celebrating the G8 Summit

Read more at: http://www.huffingtonpost.com/2009/07/07/g-8-summit-italy---everyt_n_227232.html
for the Group of Eight (G-8) summit,with subjects like the economic crisis and global warming. The summit is comprised of the eight largest industrial nations in the world - United States, Britain, Germany, Italy, France, Russia, Canada and Japan.

The 2009 G8 Summit was held in L'Aquila, Italy -- the country that currently holds the G8 Presidency -- from 8 to 10 July. The G8 group's member countries are Canada, the Russian Federation, France, Germany, Japan, Italy, the United Kingdom, and the United States, together with the European Union represented by the European Council's duty President and by the President of the European Commission.

The annual Leaders' Summit is the highest-profile and most important event in the G8 process, but that process does in fact cover the whole year, with meetings at the ministerial and ranking functionary levels. The main issues on the Italian Presidency's agenda are: a response to the global economic and financial crisis; the restoration of grassroots confidence and a boost to growth on a more solid and balanced basis, also through the definition of new, shared ground rules for economic activities; a focus on the social aspect of employment, to help the weaker sectors of society both in the industrially advanced countries and in the poorer countries; the struggle against protectionism and the deregulation of world trade for everyone's benefit; the resolution of regional crises; food security and safety; and the struggle against climate changes.

To debate these issues, the Italian Presidency organized a G8 Summit which was unique in terms of the number of countries attending, comprising as it will both the emerging countries, Africa and the main International Organizations. Some 90% of the world's economy was represented at the Summit in the expanded working sessions. 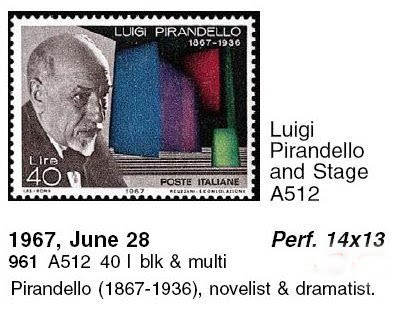 Luigi Pirandello (28 June 1867 – 10 December 1936) was an Italian dramatist, novelist, and short story writer awarded the Nobel Prize in Literature in 1934, for his "bold and brilliant renovation of the drama and the stage." Pirandello was born into an upper-class family in a village with the curious name of Kaos (Chaos), a poor suburb of Girgenti (Agrigento, a town in southern Sicily). Pirandello's works include novels, hundreds of short stories, and c. 40 plays, some of which are written in Sicilian dialect. Typical for Pirandello is to show how art or illusion mixes with reality and how people see things in very different way - words are unrealiable and reality is at the same time true and false. Pirandello's tragic farces are often seen as forerunners for theatre of the absurd.

"A man will die, a writer, the instrument of creation: but what he has created will never die! And to be able to to live for ever you don't need to have extraordinary gifts or be able to do miracles. Who was Sancho Panza? Who was Prospero? But they will live for ever because- living seeds - they had

the luck to find a fruitful soil, an imagination which knew how to grow them and feed them, so that they will live for ever." (from Six Characters in Search of an Author, 1921) 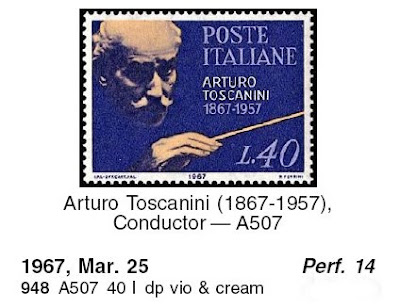 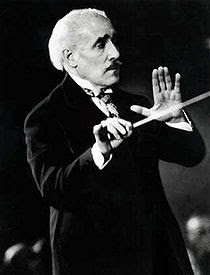 Arturo Toscanini (Italian pronunciation: [ɑrˈturɔ tɔskɑˈnini]; March 25, 1867 – January 16, 1957) was an Italian conductor. Toscanini was born in Parma, Emilia-Romagna. One of the most acclaimed musicians of the late 19th and 20th Centuries, he was renowned for his brilliant intensity, his restless perfectionism, his phenomenal ear for orchestral detail and sonority, and his photographic memory. He is especially regarded as an authoritative interpreter of the works of Verdi, Beethoven, Brahms and Wagner. As music director of the NBC Symphony Orchestra he became a household name through his radio and television broadcasts and many recordings of the operatic and symphonic repertoire.

From the article "List of people on stamps of Italy' at http://en.wikipedia.org/wiki/List_of_people_on_stamps_of_Italy
Posted by kgrek at 5:27 PM