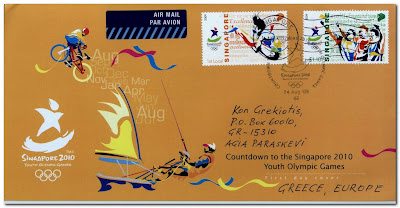 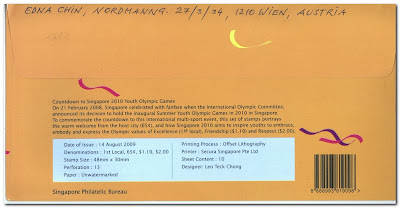 Thank you Edna
THE STAMPS

The vision of the Youth Olympic Games is to inspire young people around the world to participate in sport and adopt and live by the Olympic values. It was during its session in Guatemala in July 2007 that the IOC decided to create a nw sporting event to educate, engage and influence young athletes inspiring them to play an active role in their communities.
What are the YOG?

The Youth Olympic Games are a sporting event for young people, balancing sport, education and culture. These Games work as a catalyst in these fields throughout the Olympic Movement.
The YOG’s objectives are:

1. to bring together the world’s best young athletes and celebrate them
2. to offer a unique and powerful introduction to Olympism
3. to innovate in educating and debating Olympic values and challenges of society
4. to share and celebrate the cultures of the world in a festive atmosphere
5. to reach youth communities throughout the world to promote Olympic values
6. to raise sports awareness and participation among young people
7. to act as a platform for initiatives within the Olympic Movement
8. to be an event of the highest international sporting standard.
Who? What? When?

The Youth Olympic Games aim to bring together talented athletes – aged from 14 to 18 - from around the world to participate in high-level competitions, but also, alongside the sports element of the event, to run educational programmes on the Olympic values, the benefits of sport for a healthy lifestyle, the social values sport can deliver and the dangers of doping and of training to excess and/or of inactivity.

The first ever Summer Youth Olympic Games will bring together approximately 3,200 athletes and 800 officials in 2010. The sports programme will encompass all 26 sports on the programme of the 2012 Summer Games, with a limited number of disciplines and events. The first Winter Olympic Youth Games will bring together around 1,000 athletes and 500 officials. The athletes will compete – for the first time in 2012 - in all seven Olympic Winter Sports. The YOG follow the traditional cycle of four years, with Summer Games in 2010, 2014, 2018, etc and Winter Games in 2012, 2016, 2020, etc.


Singapore to host the 1st Summer Youth Olympic Games in 2010

Singapore will host the 1st Summer Youth Olympic Games in 2010. The result of the election based on the cast of 105 IOC members eligible to vote, was unveiled 0n 21 February 2008 by IOC President Jacques Rogge at the Olympic Museum in Lausanne.