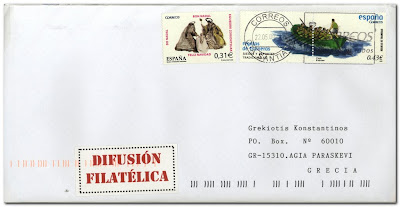 The Traditional Sports and Games series issued throughout 2008 to promote de rich sports heritage of the different parts of Spain, features in this issue the Regatas de Traineras (Rowing Boat Races). This is a traditional nautical sport with a strong tradition in the Basque Country, Cantabria, Asturias and Galicia.

The Regatas de Traineras have their origins in coastal water fishing when fishermen, after collecting the fish from the fishing-grounds, rowed as fast as they could to port. As years went past, these rowing boats were replaced by engine ones and this old fishing tradition gave way to competitions in fishing villages thus beginning one of the most popular sports in the coasts of northern Spain. The regattas that take place in La Concha (San Sebastián), were first organised in 1879 and have taken place practically every year since. Many other northern sea towns also participate in the many contests that take place throughout the summer.

Races take place in rivers, harbours and at sea with trails for each boat. The distance to cover is three miles in a maximum of four lengths and three ciabogas (a technical manoeuvre by which the boat makes a 180º turn to continue in the opposite direction). The crew is made up of 13 rowers and a cox and they are placed on the boat depending on their expertise, strength and ability.

These rowing championships began to take place in Spain in 1944 and amongst the most famous awards are the Gran Premio del Nervión, Gran Premio de Santander and Gran Premio de la Coruña and the boats from the towns of Pedreña. Orio and Kaiku are the ones that have won these awards more often.

The stamp is issued with a vignette with no postal value depicting a scene of a Regata de Traineras under the orders of the cox. 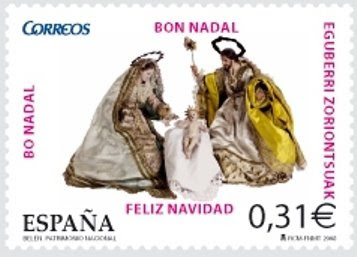 The Christmas issue traditionally features classic and modern paintings and this year’s stamps depict the Misterio-Belén del Principe, a Neapolitan and Spanish crib from the XVIII century, and the painting Maternidad by artist J. Carrero.

The Belén del Príncipe is a composition of various characters representing the birth of Jesus which are traditionally exhibited and displayed in a small grotto of a style in between classic and rustic. These main figures are usually displayed with the three wise men with their retinue, groups of angels and shepherds besides a large number of animals. Nativity scenes before the XVIII century where only displayed in convents. With the arrival of Charles III from Naples, he brought along these figures introducing cribs to the homes of the nobility and palaces where they are now exhibited. The figurines of this nativity scene were purchased for the Prince of Asturias and Prince Gabriel and were made by Neapolitan artists working at the Court. Most of the figures have their heads, hands, legs and arms carved in wood and others in clay. The body is a mannequin made out of tow and wire which allows them to move. The three main figures of this nativity scene are the baby Jesus resting on a manger, the Virgin Mary with a silk dress and her head covered and Saint Joseph with a yellow silk shawl over his right shoulder and gathered with his left hand. Both look lovingly at the baby.

The other stamp called Maternidad (Maternity) depicts the painting by artist J.Carrero. This Extremadura-born painter began his artistic career in the late 70’s and has exhibited in around fifty galleries and museums. The painter has found inspiration in the figure of a young mother carrying a naked baby. Both figures looked at sideways, stand out amongst shades of red that remind us of colours of the Poinsettia, the Christmas plant par excellence. 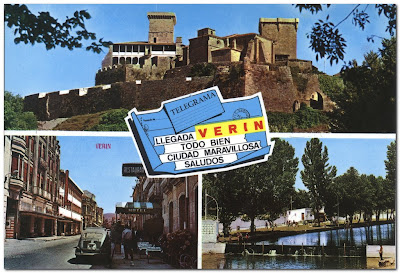 Verín is a small city in the Autonomous Community of Galicia, Spain located in the southeast of the province of Ourense. The population of the concello (municipality) is about 14,433. It is located 70 kilometers east of the provincial capital of Ourense and 15 kilometers north of the Portuguese city of Chaves. The Tâmega River flows through the town.

The town is linked with Madrid and Ourense by the four-lane A-52 (Autovia das Rias Baixas) and by the N-525. The main railway line linking Ourense to Madrid passes through mountains north of the town, but the nearest station is at La Gudiña, 31 km to the east.

Verín is a town of services with declining agricultural activity. There is a denominated wine region—Monterrey—located in the surrounding area. There are also three mineral-water bottling plants in the town: Cabreiroá, Fontenova and Sousas.

Carnival here is one of the most original in Spain with the Cigarrón, masked figures running through the streets brandishing whips and making an interesting sound caused by cow bells tied to their waists (See zanpantzar for a similar tradition in the Pyrenees). Everything has a medieval air, with little influence from the Brazilian-style carnival, which has become popular in other Spanish and Portuguese cities.

Verín has one major tourist sight, which is Monterrey Castle, a huge complex looming over the rather non-descript urban area. To reach the castle you drive about two kilometers in the direction of Ourense on the old highway, turning off on the right to climb two kilometers, passing a winery on the left. There is a parador next to the castle.

Monterrey Castle played an important role throughout the Portuguese-Spanish wars, having been strategically built on the frontier for the purpose. It was more than a castle since included within the perimeter were a monastery, a hospital and a small town which was abandoned in the 19th century. The castle itself is more impressive from afar than at closer look, but the view from the heights is worth the drive up. At night it is lit up and you can see it for miles on clear nights, even from the hills of Chaves in neighboring Portugal.