CROATIA - COVER FROM A FRIEND 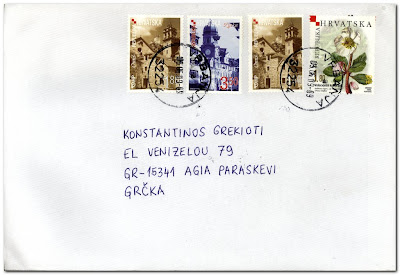 It was very kind of you
I thank you very much 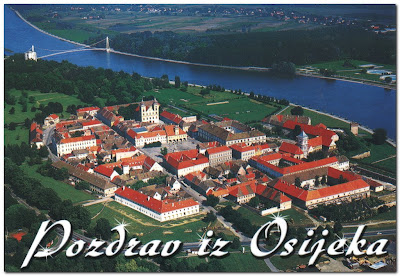 HISTORY OF THE CITY

Osijek, the biggest and the capital city in Slawonia, is situated on the right bank of the river of Drava, 22 km from the mouth of the river of Danube. The right bank is a bit higher and because of that it provides a good protection from floods, a suitable crossing over the river of Drava. In the area of today’s city there were several archaeological sites from different pre-historic periods and cultures from earlier Stone Age, over Copper and Bronze to the Iron Age.

Although the area of the city of Osijek was settled even in the pre-historic period, the first urban settlement was erected by the Romans. There are many archaeological findings and the items of a great natural, historic and artistic value-all of them are kept in Osijek Museum that was founded in the year 1877.

The Romans conquered this part of the Pannonian plain, in the area of today’s Down Town and formed the military camp and a civilian settlement Mursa. More intensive rise of the city was connected with the name of the Emperor Hadrian, who gave the status of the colony to Mursa in the year 133.

The colony Aelia Mursa was built in three phases from the middle of the 2. till the middle of 4. century. The Roman city on the border had a square form, double walls and orthogonal form of the streets. Because of extremely important strategic position the Romans built the stone bridge with six carriers across the river of Drava. Parts of this bridge are kept in the Museum in Osijek. The colony Aelia Mursa was devastated several times, and last time it was destroyed by the Huns in the year 441. After that destruction of Mursa, the city was not renovated any more and new inhabitants settled in its neighbourhood.

From the last mentioning of Roman Mursa in the year 591 till the first written mentioning of Osijek in the Middle Ages in the year 1196 there were no written documents, but there were archaeological traces that showed that the life was still going on in the area, but not in a high intensity.

Osijek in the Middle Ages

Osijek from the Middle Ages was developed in western side of today’s Tvrđa (Fortress). The oldest written documents were mentioned for the first time in the year 1196, when the King Emerik confirmed the rights to Cisterian abbey Cikador to collect fare for trade and transport by ship.

In the Middle Ages Osijek consisted of the citadel and "varoš" and it was owned by several feudal families. The family Korog ruled in the city for the longest period of time, from 1353 till 1472. There are only foundations of a big church with the Roman portal and Gothic parts that is preserved from the Middle Ages. A tombstone of Filip Korog, with his family coats of arms and the inscription, made of marble, is a finding of great significance.

During Osman’s period Osijek was well-known for its wooden bridge, which was 8 km long and considered to be a world wonder of that time. It was built across the river of Drava and across the swamp in Baranya, from Osijek to Darda. The bridge was built in a few weeks and about 25 000 people were involved in the construction. Osijek, as the biggest city in Slawonia, was very important trade and traffic centre and the point that you simply could not avoid on your way between East and South. At the end of 17. century the fights for freedom started throughout Europe – it was the time, when many "vedutas" were printed and among them there was also Osijek with its famous bridge.

Osijek after the Turks

Osijek was liberated from the Turks on 29 September, 1687. After the liberation the weakest defence points were strengthened and afterwards the complete urban structure was changed. The inhabitants of the part under a fortified place were moved about a kilometre and a half upstream of the Fortress because of the construction of new fortifications.

All three independent communities: the Fortress, the Upper and the Down Town that were rather distant one from the other, were united in one city in the year 1786. Twenty years after the unification Osijek was declared the Free Royal City in the year 1809. Almost till the middle of 19. century Osijek was the biggest city in Croatia, but because of its political and traffic isolation it lost its importance and it became the fourth city, according to the size. Today Osijek is also on the fourth place. The institutions of City government were moved to the Upper Town in 18. century.

With the historic building of the Upper Town towards the Fortress the prerequisites for connecting further parts and for building new settlements were made. In the year 1884 the city got a new way of a public transport – a horse tram. It was the first horse tram south from Vienna and Budapest.

Although there was a discontinuous urban development that lasted for almost 2000 years, the city of Osijek can be proud of its architectural inheritance gathered in the last 300 years. Preserved architecture and numerous cultural and historic objects can show us that Osijek was involved in all periods of middle-European cultural life.