On the left stamp is the head of Alexander the Great and on the right stamp is the picture of Rotonda Thessaloniki. For more info read below 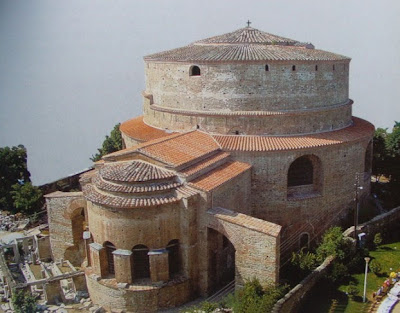 The large circular building known as the Rotunda (Rotonta) served as the place of worship within the architectural complex erected in the early 4th century AD by the Roman emperor Galerius. Following the triumph of Christianity it was converted into a church by the emperor Theodosios I (379-395).

The monument is of great significance in respect of early Christian art, for the mosaics that decorate its interior are unique in the East and denote a high degree of skill based on the precepts that underlie traditional Hellenistic painting.

The frieze depicting martyrs in a visionary and otherworldly procession is an outstanding composition. Saints at prayer before elaborate architectural facades link the ephemeral character of life on earth with the everlasting character of life in heaven. Material things are subjugated to effect a work of superb artistry and unrivalled spirituality.