On the left stamp is the head of Alexander the Great and on the right stamp is the picture of Vlatadon Monastery. For more info read below 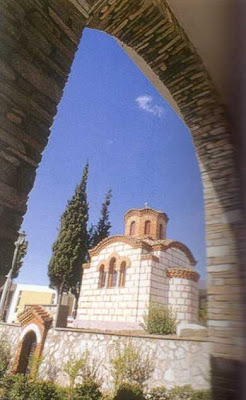 The Monastery was founded about 1360 by the Vlatades brothers, Dorotheos and Markos, members of the intellectual circle gathered around the metropolitan of Thessalonike, Grigorios Palamas, later raised to sainthood.

Despite repairs, the surviving katholikon, a domed cruciform church, retains a number of the features of the original building. The unusually fine interior decoration, dating to the period 1360--80, is today a clear indication of the searching nature of painting in the second half of the 14th century.

Grigorios Palamas, who died in 1359, is portrayed in one of the wall-paintings as a saint. The free-hand drawing does not lay emphasis on dramatic action, but the entire work, imbued with stillness and tranquillity, succeeds in conveying the artless passion for theology of scholars such as Grigorios Palamas.

At the assassination of Philip II in the autumn of 336 BC, his son Alexander III acceded to the throne. In a few weeks he succeeded in obtaining recognition as 'archon' (president) of the Thessalian League, 'hegemon' (leader) and 'strategos' (commander-in-chief) of the League of Corinth (336 BC).

When he had consolidated the northern borders of his kingdom, he dealt with rebellion of the southern Greek cities by destroying Thebes and garrisoning hostile cities with Macedonian troops.

Having entrusted the government to the aged general Antipater, in the spring of 334 BC Alexander set out on a pan-Hellenic campaign to punish the Persians and liberate the Greek cities of the Asia Minor littoral from the Persian yoke. His army, large for the times, devastated the immense Persian State and reached the Indus River.

As monarch, heir to the Persians, he organized his empire by preserving the previous administration, minting a strong currency and introducing Greek education and language. By sending out concurrent exploratory missions he contributed hitherto unknown and valuable information about the world.

Furthermore, by instituting the principle of equality between Greeks and non-Greeks, he laid the foundations on which the Roman Empire later based its development, and which also led to the spread of Christianity.

Alexander III died at the age of 33 having changed the aspect of the world and the course of history. He went down as "the Great", although he did not have time to complete his visionary task. 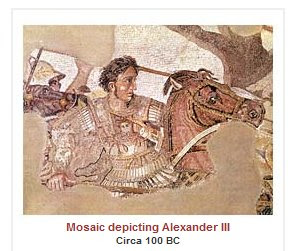