On the left stamp is the head of Alexander the Great and on the right stamp is the picture of Lefkos Pyrgos (White Tower). For more info read below 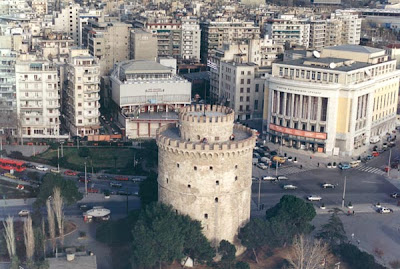 The White Tower, nowadays the emblem of Thessalonike, once stood at the south-eastern corner of the city walls. Its uncertain history is an invitation to further research.

Undoubtedly some building or other used to stand on this site throughout the centuries-long existence of Thessalonike, but whether or not the White Tower is Byzantine remains an unanswered question. It does not seem improbable that it was one of the earliest buildings erected in Thessalonike by the Ottomans, shortly after 1430.

The Turks in fact named it the Red Tower back in the 15th century (perhaps because of its masonry). In Greek tradition this name was translated as Bloody Tower, since the place was connected with the torments suffered in it by Greeks who had revolted in 1822; it was changed in 1883 to White Tower, a name which it acquired when it was whitewashed following the Sultan's instructions, as British archival sources testify.