‘Not Quite Right’ – When Defective is Better

By Rodney A. Perry

There can be few pursuits outside of philately where imperfect items can be more sought after by enthusiasts than the perfect. While a printer would regard with a degree of mortification stamps he produced with an error such as colour omitted or inverted, or imperforate when intended to be perforated, philatelists are delighted by such anomalies. Similarly, postal history buffs (those who study the stamp/cover relationship and subsequent journey) are enthused by misadventures in the postal system. Such items are highly sought after and consequently may be valued at considerably more than if no incident had occurred. A selection of ‘N.Q.R.’ items is the subject of this month’s column. As will be seen, it is worth knowing about such material and keeping a lookout for it should it just ‘pop up’, which is usually the way I find it. And of course the subject provides yet more examples of why covers can be that tad more interesting than the humble postage stamp which may accompany them, and similar applications can be found for most other countries of the world. 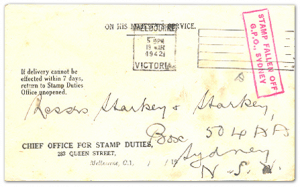 Occasionally it is a philatelic blessing when a stamp is lost from a cover during transit. The Official cover in Figure 1 almost certainly was franked with a 1942 KGVI 21/2d scarlet which has fallen off cover between departure from Melbourne (the void in line cancellation at top right indicates stamp was in place when machine cancelling took place) and arrival in Sydney. No great loss to the international stamp stock; over 1.3 billion were issued, but in place of the stamp we have a superb early strike of the handstamp ‘STAMP FALLEN OFF / G.P.O., SYDNEY’, thoughtfully applied in bright pink for added philatelic impact. This marking was used by Postal staff to prevent the recipient from being taxed for what otherwise might appear to be an unfranked article. Many larger post offices had a ‘fallen off’ handstamp, some of which varied greatly in configuration and provide in themselves an interesting study. Value : $40 (cover without incident $2). 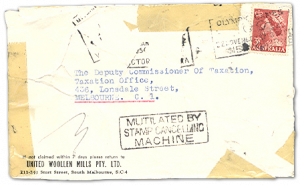 Unloved by man and machine alike the Taxation Office was probably fortunate to have received the article in Figure 2. Clearly the postal machinery had difficulty digesting it as attested by the covers condition and the unapologetic handstruck ‘MUTILATED BY / STAMP CANCELLING / MACHINE’ applied by Melbourne Postal staff, who also would have been responsible for the crude attempt at repairing the damage. A number of variations of this marking were in use throughout Australia and are sought after and not easy to find. Value : $50 (cover without incident $2 – largely for the Olympic slogan cancel). 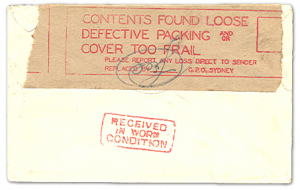 From Braidwood to Terrigal, N.S.W., the cover in Figure 3 apparently arrived at Sydney G.P.O. unsealed and with the contents loose. One doesn’t have to be Sherlock Holmes to know this for the highly explanative sealing label ‘CONTENTS FOUND LOOSE / DEFECTIVE PACKING AND / OR / COVER TOO FRAIL / PLEASE REPORT ANY LOSS DIRECT TO SENDER/ REPLACED BY _____ G.P.O. SYDNEY’ tells all, and cover is further embellished by the handstruck ‘RECEIVED / IN WORN / CONDITION’, in the philatelically-preferred red. These are scarce additions to an otherwise forgettable cover (franked on reverse by our ubiquitous 1942 KGVI 21/2d scarlet). I spotted this cover in the Argyll Etkin Ltd stock when I was at New Zealand 1990, the international philatelic exhibition. Fellow auctioneer and longtime friend, Hugh Freeman, spied it on my desk at the exhibition and persuaded me to resell it to him. Years later I bought it back, indirectly in an auction. Enthusiasts are incurable. Value : $200 (cover without incident $2 – for the Braidwood cds!). 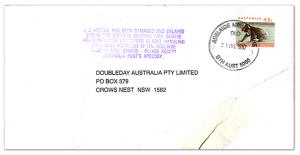 Way too much information from Australia Post to explain away relatively minor impact trauma to the cover in Figure 4. In case illustration is too small to read the post office-applied handstamp it states ‘THE ARTICLE HAS BEEN DAMAGED AND DELAYED / WITHIN THE ADELAIDE CENTRAL MAIL CENTRE / AFTER BECOMING ENTRAPPED IN MAIL HANDLING / EQUIPMENT INSTALLED IN THE ADELAIDE / CENTRAL MAIL CENTRE – PLEASE ACCEPT / AUSTRALIA POST’S APOLOGY.’. Compare this to the P.O. explanation provided in Figure 2. Value : $15 (cover without incident 50c – for the cds, maybe). 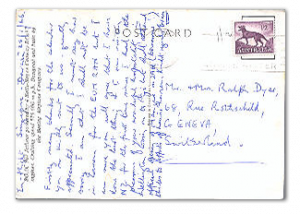 One occasionally encounters Colonial-era postal devices used well past 1913 when the first Commonwealth stamps appeared. Use as late as 1960, as shown in Figure 5, is unusual. Here we have two strikes of the Victoria handstruck oval ‘RECEIVED OPEN / AT / GENERAL POST OFFICE / VICTORIA’. In addition to the stamp haven fallen off by the time it arrived at Melbourne on 14 May 1960, the sender must have omitted to seal the envelope (’spit’ again in short supply) hence the application of the oval marking, which clearly was by then in a very worn state. More modern devices or labels were available for this type of situation and resorting to such late use of the ancient device is both quirky and rare. Value : $75 (cover without incident virtually worthless). 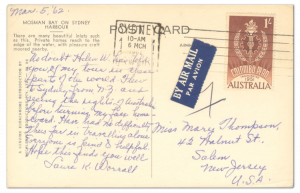 Not much to recommend the cover in Figure 6 were it not for the application of the handstamp lower left, and surely this cover would otherwise not have survived. By unknown cause, but probably careless handling, this airmail cover from Switzerland to Hobart was found to be damaged upon arrival at Launceston. By way of explanation for the mishap the ‘RECEIVED LAUNCESTON / IN DAMAGED CONDITION / SIGNATURE . . .’ handstamp was applied by Launceston Postal staff and initialled. An instance of ‘hand-stamp saves adhesive-stamp’. Value : $25 (cover without incident zero). 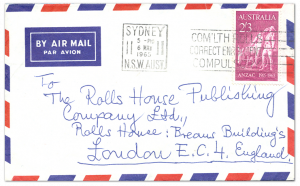 Upon first glance of Figure 7 well might the reader react ‘What is he thinking here?’. Certainly disaster has befallen this item but from a philatelic point of view this is disaster of the collectable kind, for this item is a survivor from the QANTAS flying boat ‘Coolangatta’ which crashed in Sydney Harbour shortly after take off from Rose Bay. Most of the mail on board was salvaged and received the handstamp ‘RECEIVED DAMAGED / BY WATER / G.P.O. SYDNEY’. In this particular instance saltwater has caused not only loss of the stamp but also the address details, necessitating the additional ‘INDECIPHERABLE’ handstamp. The item was probably returned to sender unless the enclosure provided adequate addressee details. A very scarce survivor. Value : $250 (cover without incident probably zero). 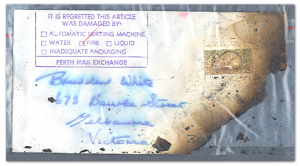 The ‘What is he thinking’ comment could also apply to Figure 8! Addressed to my old firm, Brusden-White, the article was delivered by Australia Post in the accompanying sealed bag for obvious reasons. The handstamp upper left applied at the Perth Mail Exchange unsurprisingly gives ‘FIRE’ as the relevant reason from five possibilities for the ‘IT IS REGRETTED THIS ARTICLE / WAS DAMAGED . . .’ apology. Fortunately, philatelists never resort to such measures to contrive a philatelic item, do they. Value : $15 (cover without incident zero).

Rod Perry has been a philatelic trader since 1962 and a regular Stamp News advertiser since the 1960s. He founded Rodney A Perry Auction Galleries (now Millennium Philatelic Auctions) in 1971. As a collector he has exhibited nationally and internationally. Rod prefers his used stamps on cover and likens taking a stamp off its original cover to converting a tree to woodchips.